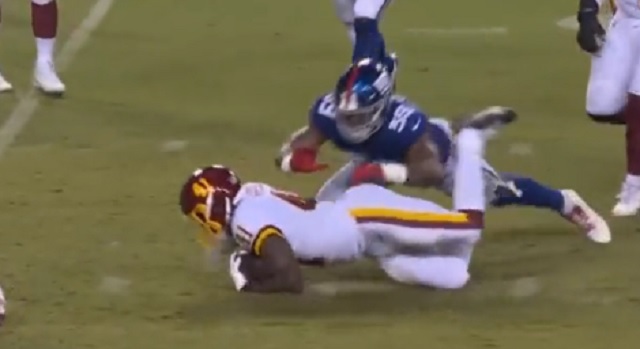 The refs in the WFT-Giants game have been pretty bad.

In the second quarter WFT running back J.D. McKissic tripped over himself, got back up and appeared to clearly get the first down after diving forward on the play.

McKissic was ruled down short on the field and when the refs took a look at the replay they bizarrely let the play stand despite the fact that it was obvious McKissic hadn’t been touched when he lunged forward.

This might be the worst replay review I’ve ever seen. Even Mike Pereira was disgusted pic.twitter.com/x5y68pDbE0

Fox rules analyst Mike Pereira was confused as to why the call wasn’t overturned.

“In this case clearly he wasn’t touched so he gets the full advanced I’m a little but surprised by that because it is reviewable.”

Fans were also confused by the ref’s decision.

I mean, he literally didn’t touch a single player and just tripped over himself. That’s a concrete undisputed fact proven by that video replay. What the f*** is going on in these reviews booths? I just don’t get it. How are they this bad?

The ref taking a look at that last replay review. pic.twitter.com/zHakwtB3CY

I'm not even complain about the refs guy and I don't care even a little bit who wins but this crew is REALLY struggling tonight.

That spot AND replay review were a joke right there.