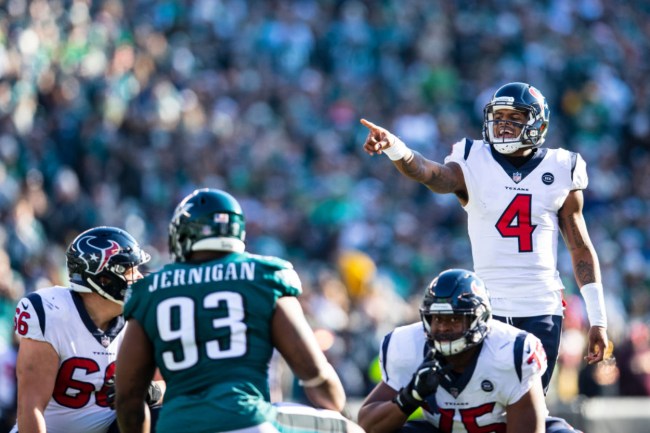 The Eagles had a plethora of draft picks, cap space, and still play in the lowly NFC East that could have been attractive for Watson, but he ultimately chose the Cleveland Browns.

The Eagles weren’t one of Watson’s ‘finalists’ with the Saints, Falcons, and Browns topping his list of preferred teams, but it was previously reported that Philly was interested in the QB.

There were plenty of rumors suggesting Watson didn’t want to go to Philly and face that media market. He does still face 22 civil lawsuits, which will be difficult to handle anywhere, but Philadelphia’s media is one of the toughest markets in sports.

Why Deshaun Watson Didn’t Want To Land In Philly

The real reason, or at least the latest reported reasoning for Watson not wanting to go to the Eagles, has everything to do with Jalen Hurts and loyalty.

According to John McMullen of Philly Voice, Watson didn’t want to risk ruining his relationship with Hurts. The two seem to be good buddies, plus they both worked out with the same QB trainer this offseason.

“The interesting part is why Watson was so steadfast in his refusal to come to Philadelphia from start to finish in this entire saga. The principles aren’t going on record anytime soon but the strongly held belief around the league is that Watson’s aversion to the Eagles had to do with his loyalty to Jalen Hurts.”

“Sources familiar with Watson’s sentiments pointed to the relationship built between the two players in the offseason through the connection of working with the same QB trainer, Quincy Avery.”

Eagles fans may not like reading that. Now, Philly will enter the new season with Hurts still under center, questioning ‘what if’ Hurts wasn’t in the picture to begin with.