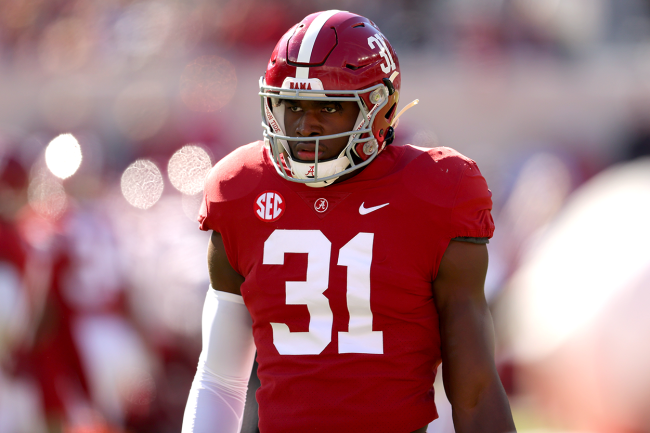 Will Anderson Jr. probably should have received an invitation to New York City for the Heisman Trophy ceremony last season. The 20-year-old Alabama linebacker had equal, if not better, stats than Michigan’s Aidan Hutchinson and now he has a chip on his shoulder ahead of 2022.

Based on his official team photo, Anderson is out for blood.

Earlier this week, the Crimson Tide took a break from fall camp to line up in the stands and take a team shot. With Nick Saban front and center, the players surrounded their head coach and were surrounded by the coaching staff. It was a fairly standard photo.

As is normally the case, the facial expressions of the players in the stands varied from person to person. Some of them smiled, others did not.

Amongst those who kept a straight face was Anderson. He, standing next to a cheesin’ Bryce Young, is not just expressionless.

No, rather— Anderson looks like he is full prepared to go to war.

If I could hack I would send Will Anderson the address of every Casual who left him off their Heisman ballot pic.twitter.com/MT7sNfhlvC

After a year in which Anderson received the Bronko Nagurski Trophy as the most outstanding defensive player in college football, Anderson is likely to play himself back into the Heisman Trophy conversation. If he is more dominant than he was last season, in which he recorded a nation-leading 17.5 sacks and 34.5 tackles for loss, he could even end up winning it.

If his demeanor in the official team photo is any indication, he is not going to settle for anything less than dominance. Anderson is going to be a problem for his opponents this fall. It’s going to be a lot of fun to watch.