Did The Dodgers’ Will Smith Hit A Home Run That Shouldn’t Have Been A Home Run? 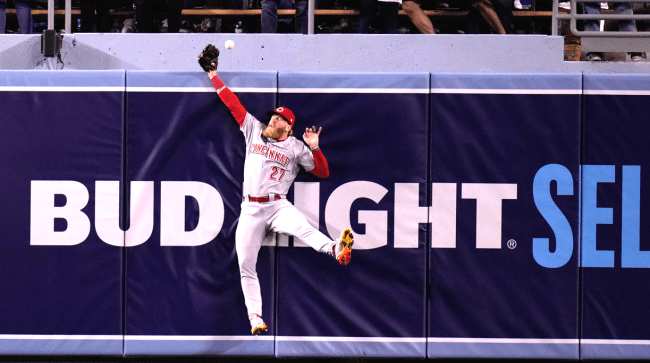 The Los Angeles Dodgers came up victorious Thursday night in the team’s home opener, 9-3 over the Cincinnati Reds, thanks in large part to a six run eighth inning.

One of the big blows that was struck during that bombardment in the eighth came from a three-run home run hit by Dodgers catcher Will Smith.

With runners on second and third, a 3-1 count, and one out in the eighth, Smith launched a fly ball to center field. Reds center fielder Jake Fraley appeared he might have a bead on the ball, but came up empty as the ball went over the fence, scoring three.

WILL HE DO IT? pic.twitter.com/YOFCb5ixMM

What that video of Will Smith’s home run does not show is the fact that had Fraley not been so close to catching the ball, Smith probably would have only gotten a double out of it.

Watch as the ball hits the top of the outfield fence, then caroms off of Fraley’s glove and out of the park.

Will Smith's homer was actually only a homer cause Jake Fraley deflected it out. pic.twitter.com/QxnqYdgkGe

Talk about not being rewarded for the effort.

Should Will Smith’s home run really have been ruled a ground rule double?

The bizarre play then sparked a whole discussion about whether it should have been a home run at all. Some fans thought it, by rule, should have been a ground rule double. After all, the play certainly, in hindsight, was reminiscent of a play that happened in 2021 in the ALCS.

This was called a Ground Rule Double, leaving #YandyDiaz
stranded at third instead of scoring.

Right call by the umps or no?@RedSox @RaysBaseball #ALCS pic.twitter.com/72AnJvC0fG

Shouldn’t that be a ground rule double?

If the ball left the field of play off the wall, then yeah it's a GRD.

But it didn't. It was still in play when the fielder deflected it out. A ball that goes over off a player is a home run in every stadium.

It didn’t hit a playing surface below the home run line. Read your own definition.

Alright we’ll I’m gonna go with the umpires at the stadium, the umpires in New York, the Reds not challenging, and the actual rule in the rule book over some Joe Schmo on Twitter. Thanks tho. pic.twitter.com/RG6azCu2BG

So… should it have been a home run or a ground rule double?

According to BaseballRulesAcademy.com, “Any batted ball that strikes the facing of the outfield wall or the top of the wall, should be treated by runners and outfielders as balls in play.”

So if it were treated as a “ball in play” then it went over the fence off the player’s glove it should have been a ground rule double. I think.