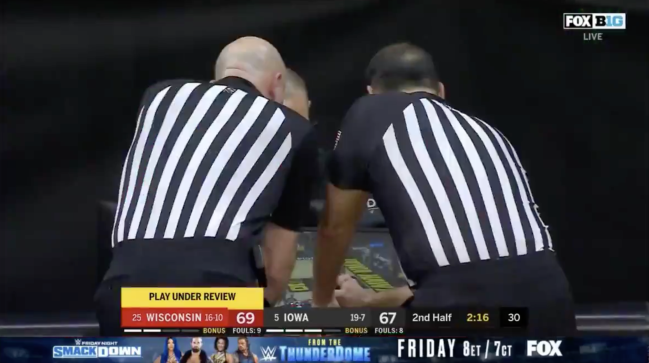 Sunday’s top-25 matchup between Iowa and Wisconsin came down to the final moments, but the exciting finish was marred by the officiating. Fouls were abundant and reviews were frequent. The constant stoppages in play killed any momentum, interrupted the flow of the game and led to frustrations both on the sidelines and amongst those watching.

To the officials working today's game between Wisconsin and Iowa:

You've successfully ruined a heck of a college basketball game.

Included in those who were expressively upset with the referees injecting themselves into the closing minutes was color commentator Donny Marshall. After spending nearly a decade in the NBA, the multi-millionaire moved from the court to the booth and serves as a college basketball analyst for Fox Sports, Westwood One Radio and CBS Sports Network. He was on the call for the B1G battle on Sunday and decided to air out a pent-up grievance with his wife, Kelly, on national television.

In reference to the persistent interruptions down the stretch, Marshall fired unexpected, totally uncalled-for shots at his life partner of 23 years and her inability to watch a movie without frequent pauses.

Is this basketball analysis or just an announcer throwing his wife under the bus on national TV?

Seems like a weird time to release some pent-up frustration. pic.twitter.com/cMqRwM6Hyu

The frustration surrounding the referees was warranted. It was terrible officiating down the stretch and it ruined the entire experience of what could have been one of the better finishes of the year. But to come out SWINGING against your wife with an expectation that she will let it slide is a wild move. Sure, watching movies with your significant other might be a brutal experience. (It usually is.) However, to bring it up on Fox, in front of a Sunday afternoon audience, isn’t a good idea— no matter how long it’s been simmering.

Kelly had to have received at least 15 texts from various people she knew and Donny is for sure sleeping on the couch tonight. So many shots fired.