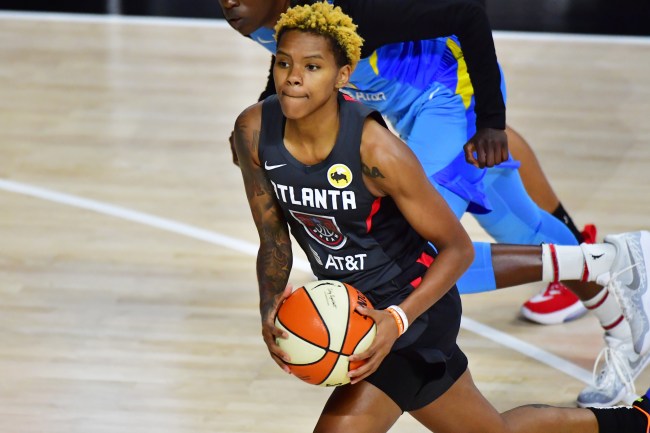 Shaq caused a firestorm on Twitter after making some comments about how he would change the WNBA game to make it more exciting for fans during last night’s episode of Inside The NBA.

According to Shaq, the WNBA should lower the rims to allow the players to dunk and generate more excitement for the game.

Candace Parker wasn't into Shaq's suggestion that the WNBA should lower the rim so that players could dunk "It's coming…My next child will be drop step dunking" pic.twitter.com/5tVkRJ3Nb4

In beach volleyball, the women’s net is about half an inch lower, so do you think if we just lower the rim so you could dunk like we dunk that it’ll give you more oomph that you already have. because listen you guys are doing the stepbacks, the pullbacks, ya’ll are doing everything we’re doing, I don’t see a lot of people going up with two hands.

Fans of the WNBA immediately fired back at Shaq over his suggestion.

steph curry, trae young and kyrie irving have 3 of the top-15 highest-selling jerseys in the nba this year

they have combined for one dunk

this talking point is not just stupid, it also has no merit https://t.co/YDqudRILNL

On Wednesday WNBA player Courtney Williams was speaking at a WBB weekly Clubhouse meeting and agreed with Shaq about lowering the rims in the WNBA.

"I feel like the rims should be lower… I want to dunk." @CourtMWilliams agrees with @SHAQ on @Khristina2334 WBB Weekly Clubhouse

"I'm trying to dunk on somebody's head… I think the rims should be lowered." – WNBA player @CourtMWilliams via WBB Weekly Clubhouse

Interesting to hear @CourtMWilliams thoughts on the “lower the rim” debate, agrees with Shaq that lowering it would help appeal more to casual viewers

The lowering the rim debate isn’t new but it’s interesting to hear a WNBA player come forward to support the idea.