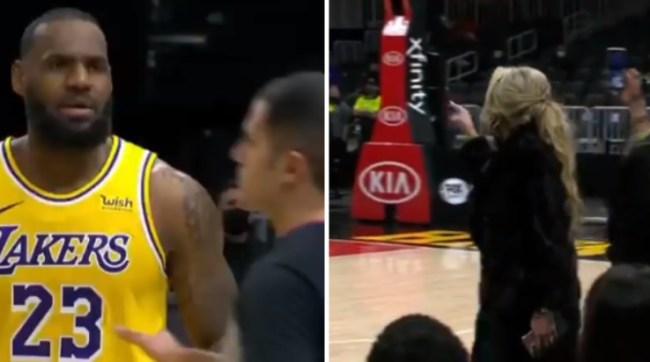 LeBron James has had pretty interesting interactions with fans sitting courtside this season.

On Monday night, just a few days after talking trash with a Cavs exec during a game, LeBron got into another bizarre altercation with a fan sitting courtside.

During the Lakers-Hawks game, a woman named Juliana Carlos had to be escorted out of the building for getting into a heated verbal altercation with LeBron.

Bron got heckled by a fan in Atlanta. 👀🍿 pic.twitter.com/6dcVpyhy9K

After getting kicked out, Carlos took to Instagram to tell her side of the story where she says she told LeBron “I’m going to fuck you up” because he cursed at her husband.

Woman says she got kicked out of game for telling LeBron James she was going to “fuck him up” after LeBron stared down her husband pic.twitter.com/rcna7q25Dc

Hawks Karen is still going at LeBron on Instagram “Excuse my I have courtside seats that I pay for, fuck you LeBron you’re a fucking pussy”

Update: LeBron talked about the altercation during his postgame press conference.

Update #2 This is apparently Juliana’s husband who was involved in the altercation with LeBron.