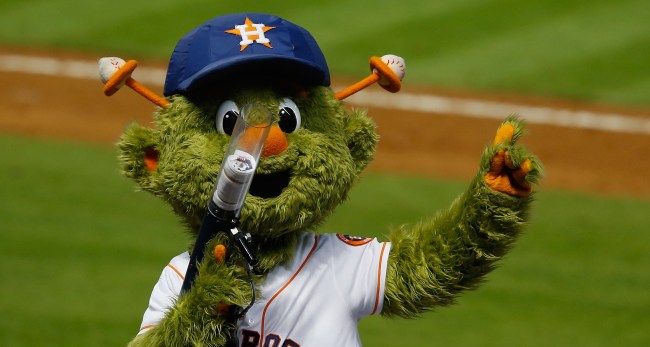 The conclusion to the study stated that it “does not suggest that air cannons should not be used at public venues, but rather it asserts that air cannons are powerful devices capable of inflicting damage unless reasonable control measures are utilized to prevent unnecessary risks.” However, it also stated that “air cannons can likely produce injuries in the extremities, namely the finger if certain criteria are met.”

Now, one woman named Jennifer Harughty who has filed a lawsuit against the Houston Astros for more than $1 million, claims, according to TMZ Sports, that a t-shirt cannon “shattered” her finger when the team’s mascot Orbit “fired t-shirts at her and her family at a rapid pace from his ‘bazooka style T-shirt cannon.'”

“It was a life-changing event that I think if it happened to anybody else … they would feel the same way,” Harughty said. “It has nothing to do with the Astros.”

After the game, Harughty went to the emergency room, where she was told she had a severe fracture and would require surgery, the suit said.

An orthopedic surgeon placed two screws in her finger on July 12, 2018. Harughty had physical therapy twice a week, but still had pain and swelling.

On Oct. 16, 2018, Harughty had a second surgery to remove the screws and restore the use of her finger.

The lawsuit says Harughty’s finger still has little to no range of motion and permanent impairment.

“We thought maybe there is something the Astros can do to help. We’re over $15,000 in medical bills, multiple surgeries,” said Harughty.

The Astros declined to help and now she is suing for medical expenses, mental anguish, lost opportunity, lost enjoyment of life, and lost earnings.