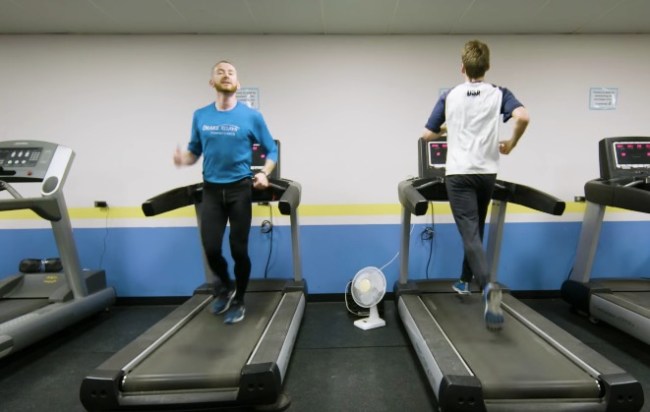 Aaron Yoder is the world’s fastest *backwards* runner. He’s been running competitively for over two decades since he was in elementary school. Yoder ran so much that he injured his knee the point that his doctor cautioned him to stop running forever. That’s when Aaron realized he needed to make a big change and he started running backward.

He holds the world record for the fastest mile run backward with a blistering time of 5 minutes and 54 seconds. That’s faster than most people will ever run a forward mile. Aaron Yoder was recently featured in a story by Great Big Story where he talked about Retro Running, or Backward Running, and it’s pretty fascinating to see how a professional backward runner trains:

I’ve torn the lateral meniscus in my right knee twice, had surgery on it once, and I struggle with running long distances on concrete. There was a time in my life when I used to run anywhere from 3 to 7 miles every single day and I’m fairly certain I funked my knee permanently from all that running on concrete. I had no idea that running backward was a thing anyone did, and it’s intriguing to me that it puts zero impact on your knees.

With that said, I don’t see myself every firing up the treadmill at the gym to run a few miles backward but mostly because I don’t want to fall and bust ass. It seems like it requires learning an entirely new type of muscle memory and a process that lead to a lot of falling on your ass, not exactly something I want to do when I can just get in cardio in other ways.