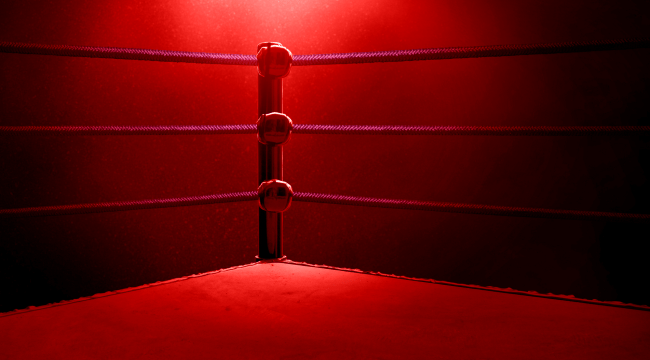 Indie wrestling is the wild wild west of sports entertainment. Anything can happen and severe injuries can occur at any moment.

Case in point, an indie wrestler by the name of Devon Nicholson who goes by the wrestling name Hannibal repeatedly and violently stabbed a referee in the head with a spike until the ref needed immediate medical attention. In the immediate aftermath of that incident where the footage (below) went viral, it appeared as if Devon Nicholson aka Hannibal could possibly face criminal charges.

Now that a few days have passed there’s more information coming to light and no charges will be filed because the referee actually agreed to be a part of the stunt that went too far (major understatement). The referee apparently agreed before the fight to be paid $75 ‘to bleed’ but there was no mention of being brutally choked and repeatedly stabbed with a spike.

You can see the video of the violent and bloody stabbing here on Twitter. It’s hard to watch. The referee suffered ‘major head injuries’ after being stabbed a dozen times with an iron spike. So watch at your own risk.

Lando is recovering at home:

Recovering at home, still a big fuzzy and pain, yes lots of pain. But I’ll live. Thanks you all for out pouring of love and support .
I am a firm believer that if you put good out into the world, good will return to you #downbutnotout pic.twitter.com/0bE71rWbtP

Now, according to TMZ, police investigated the incident and spoke with the referee (Lando Deltoro) and he is not pressing charges. The ref admitted to ‘cutting a deal’ with Hannibal before the match and was paid $75 to ‘gush blood’ in the ring.

Lando Deltoro later spoke with TMZ himself and told them that he did agree to be paid an unspecified amount of money for blood but he never agreed to the “extra spiking”.

Hannibal the wrestler (Devon Nicholson) is henceforth banned from participating in any World Class Pro Wrestling events, or so they say, I’d be shocked if that tune doesn’t change after the press this incident received.

Lando has since revealed on Twitter that doctors found a blood infection they believe is a reaction to. the gold paint on the spike and not Hep C, and later he shared the VA found something they didn’t like so he is back for more testing.

VA found something they didn’t like, so they sent me to the ER at Baylor ft worth. Will keep you all posted. pic.twitter.com/CEXAZPK3CW

Hey there.
Don't book Devon Nicholson a.k.a. Hannibal the Bloodhunter.
He should be in jail.

The actions of Devon Nicholson/The Blood Hunter/Hannibal are horrific and reprehensible. In a business all about trust and cooperation, it is absolutely unacceptable to do what was done over the weekend. We join many others in calling for promoters to stop booking Devon.

I’m not a wrestler. Haven’t taken even one bump. But I shouldn’t have to be to know not to stab a dude in the head multiple times. Devon Nicholson needs to be in prison, not in a wrestling ring.

anyways, keep Devon Nicholson aka Hannibal out of wrestling, thanks.

Just a brutal situation all around.