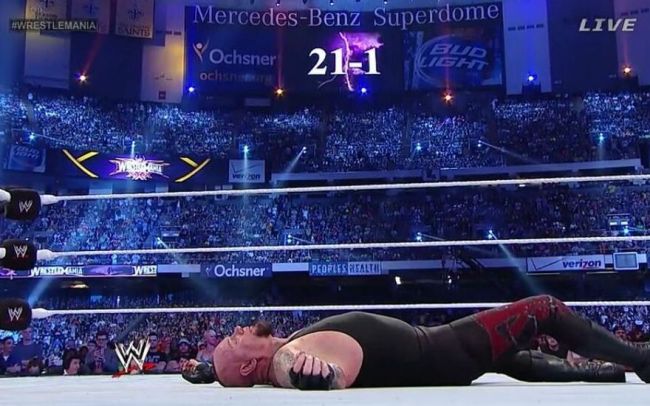 This Sunday at Survivor Series, the WWE will say farewell to The Undertaker.

He’ll still make random appearances on TV – and possibly work for the company behind the scenes – but the man behind the gimmick said he’s done being an in-ring performer.

The company is running a “30 Days of The Undertaker” event on the WWE Network and released new documentaries and interviews about the legendary performer and his career.

This past weekend, WWE Network debuted “Brothers of Destruction,” a show dedicated to The Undertaker and Kane characters. Glenn Jacobs appears on the documentary to discuss his time being both a brother and foe to the legendary WWE star.

The conversation turned to The Undertaker’s WrestleMania streak being broken by Brock Lesnar back in 2014. Taker explained that the original plan was to go over Lesnar on that show but plans changed the day of the event.

“I got to the arena that day and I was going over.

I mean, we had gone back and forth and when I showed up, I was going over.

Through the course of the day, Vince would come to me and say that he’s changed his mind. man, I was like, ‘Okay, I don’t think Brock needs it, but at the end of the day, it’s your show, it’s your call. If you’re sure about it, then that’s what we’ll do.”

Jacobs pulled no punches when discussing his feelings about Lesnar being the man who ended the streak.

“My reaction, when I was watching, I thought the finish got messed up.

I was like, ‘they’re going to restart the match or something because something got screwed up.’

They didn’t. I walked out of the room.

I was literally so mad about it. I know that the streak wasn’t something that anybody had ever planned and it was just something that had kind of organically evolved, but it had become a part of WrestleMania lore at that point.”

Both men agreed that Lesnar didn’t exactly need a win over The Undertaker at WrestleMania. He was already a huge star. Both performers feel the honor should have gone to a younger guy, to elevate him to a higher status.

They both settled on the same name.

Roman Reigns would end up facing – and beating -The Undertaker at WrestleMania 33 in 2017.