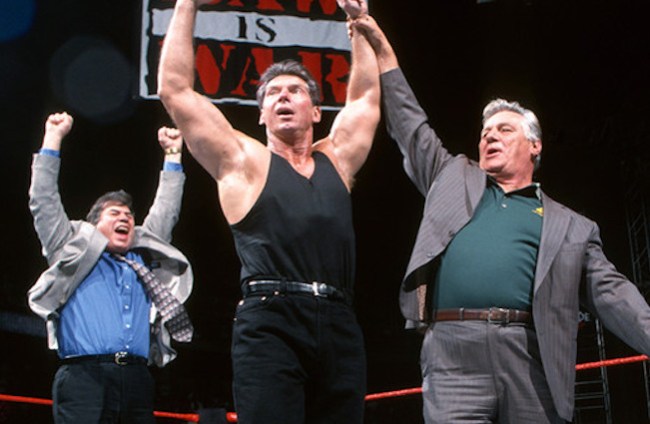 Sad news for wrestling fans. WWE Hall of Famer Pat Patterson has passed away at the age of 79.

A true trailblazer of the industry, Patterson was linked to many “firsts” in sports-entertainment throughout his storied career, including the first-ever Intercontinental Title reign and the creation of the Royal Rumble Match.

In a career spanning six decades, the renaissance man left an indelible mark on the industry in the ring, on the microphone and behind the scenes.

Patterson began his career in 1958 in his native Canada before becoming a fixture in the Bay Area for nearly two decades. After winning the AWA Tag Team Championship with Ray Stevens in 1978, Patterson moved on to WWE.

Under the tutelage of The Grand Wizard, Patterson made an immediate impact and became the first Intercontinental Champion in September 1979.

Patterson’s most legendary WWE rivalry was undoubtedly his war with Sgt. Slaughter, which captivated the WWE Universe with Boot Camp Matches and a brutal Alley Fight at Madison Square Garden.

Younger fans will remember Patterson from his “Attitude Era” days as one half of Vince McMahon’s “stooges.”

Former stars, current performers, writers, and rival wrestling companies are paying tribute to Patterson on Twitter as news of his passing broke this morning.

I can not express how crushed I feel right now with the loss of Pat Patterson. A true member of my family, mentor and dear friend.
I love you Pat.
God speed. pic.twitter.com/FdaAFnsw8m

Loss is incredibly difficult. Those we love are only truly gone if we stop caring. Pat Patterson lived life as it should be lived with passion, love and purpose. He helped so many and always entertained with a story or joke. He will live on in my life always. Love you Patrick.

I just heard the terrible news about the passing of Pat Patterson. I loved the man. I could listen to his stories for hours. One of the all-time great wrestlers, one of the best minds in the business, and a dear friend.#RIPPatPatterson https://t.co/SozhlF8bQY

Loved @wwe Hall of Famer Pat Patterson as a great friend and a mentor. The incredible times we had traveling the world, watching him sing karaoke, telling stories, talking golf are something I’ll treasure forever. Love you Pat, RIP legend. pic.twitter.com/xk3y08J24H

Just heard of the passing this morning if the great, Pat Patterson.

A wonderful mentor who taught me so much.
RIP old friend. 🙏 pic.twitter.com/t61R9yCze1

PAT PATTERSON I DONT KNOW WHAT TO SAY OTHER THAN I LOVE YOU. YOU HAVE BEAUTIFUL MIND FOR THIS BUSINESS AND BEAUTIFUL HEART FOR THIS WORLD. MY HEART IS BROKEN. GOD BLESS YOU AND YOUR FAMILY. THANK YOU FOR YOUR FRIENDSHIP #rip pic.twitter.com/XASbSUG0qO

WWE has announced that @WWE Hall of Famer, and the first-ever Intercontinental Champion, Pat Patterson has passed away. pic.twitter.com/BhLkXC55un

Pat Patterson was an absolute legend in and out of the ring. I’ll miss him very much. pic.twitter.com/pgizW5rGB5

Saddened to hear the news about Pat Patterson. Coming to WWE in 2002 was a “unique” situation. Pat was one of the first to go out of his way and genuinely make me feel at home. We shared many hours, stories, and yes a cocktail or 2. RIP Pat. You did it your way.

Rest in Peace Pat Patterson. Thank you for all that you gave to the world of professional wrestling. Rest easy sir….. https://t.co/fd0MUi0DVk

Wow – what a loss for the @wwe family. There was never a time I saw Pat Patterson backstage at a show or event where he wasn’t smiling or trying to make people laugh. Thanks for always being kind to me during our interactions. Your bright spirit will be missed.

So sad to hear of the passing of @wwe legend Pat Patterson. One of the greatest minds in the business and just an all around great guy. I will miss him and his karaoke! RIP my friend. You are a hero to many! pic.twitter.com/WXFwJ1fjkO

Heaven gained an angel! As my heart breaks a bit! Pat Patterson would fill a room w/ laugher, always sit & make me laugh every week in catering by barking & people would wonder where the dog was! Would joke w/ @HEELZiggler & I, & most importantly supported me! #RIPPatPatterson pic.twitter.com/7D65WHToY9

Man… this one is the worst. Whether it was as a wrestler or as one half of the brilliant 'Stooges', Pat Patterson was constantly awesome.

Thoughts with his friends and family. The way he said 'banana' used to make me smile every time. 2020 is just awful. https://t.co/8jtLop4hHh

Watching Pat Patterson sing My Way with one of @TheMarkHenry’s children is still one of the sweetest memories I have. Rest easy legend. https://t.co/QLNZJYdqfr

Terrible news about Pat Patterson passing. I was aware, via his co-author and friend Bertrand Hebert, that he was in poor health, but did not realize how dire. Pat was a trailblazer in the wrestling ring and outside of it. Athlete, entertainer, innovator and genuine LGBTQ icon. pic.twitter.com/PGzyi9ySlO