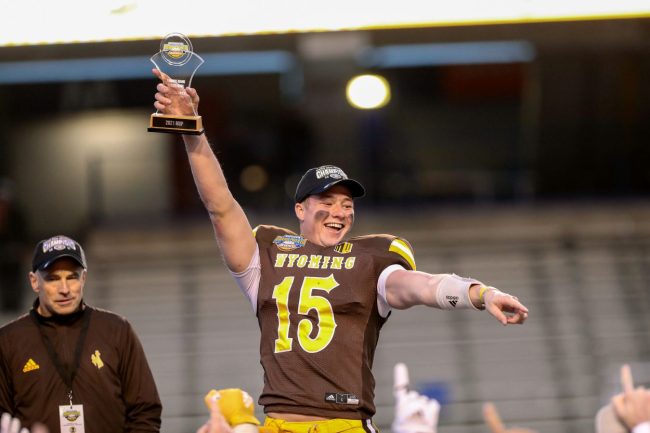 Wyoming quarterback Levi Williams has entered the transfer portal. His decision came less than 24 hours after he was the biggest factor in his head coach getting doused in french fries.

Williams, a (COVID-19 waiver) sophomore, was the Cowboys’ backup quarterback this season. However, when starting quarterback Sean Chambers was benched against New Mexico in October, he took over the starting role.

The two split time throughout the finish to the regular season, but the picture came into focus by the end of the year.

Wyoming qualified for the Famous Idaho Potato Bowl against Kent State on Tuesday and it was Williams behind center. He proceeded to go crazy.

During the Cowboys’ 52-38 win, Williams became the first quarterback in history to rush for 200 yards with four rushing touchdowns and a passing touchdown in a bowl game. He finished the game with exactly 200 yards on 16 carries and went 9-for-11 passing for 127 yards.

Williams was named the Famous Idaho Potato Bowl MVP after the game and rightfully so.

Prior to claiming his award, as is tradition, his coach received a celebratory cooler bath. Typically, the coolers are filled with water or Gatorade.

Not at the Famous Idaho Potato Bowl. As the clock wound down to zero, head coach Craig Bohl tried to evade the bath.

He could not. In turn, two cowboys dumped the cooler upon his head and Bohl was covered in french fries. It was glorious.

Williams, who was the top player in the game, entered the transfer portal on Thursday.

In God’s hands!!! Hope Pa and Grams are proud!!! pic.twitter.com/TInzpiGFc0

The former three-star quarterback from Texas will have at least two years of eligibility remaining. He was recruited by Houston, Baylor, TCU, Minnesota and UTSA out of high school.

Regardless of where he ends up next, Williams really made it rain french fries and then bounced less than a day later.