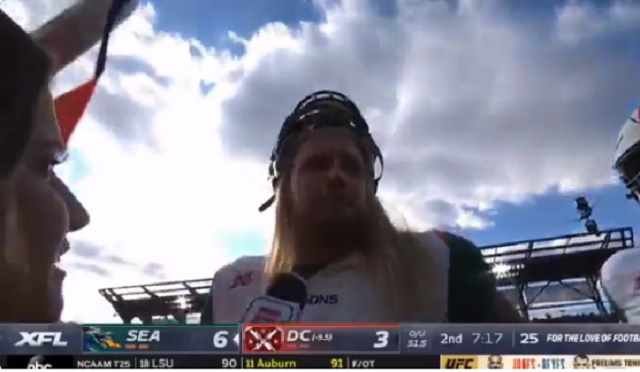 The XFL debuted on Saturday afternoon and one of the unique aspects of the league’s broadcast are the immediate sideline interviews with players and coaches.

Unfortunately the XFL might have to end the sideline interview because players are going to end up cursing a lot during the heat of the moment.

That’s what happened early on in the first game of the season when ABC’s Dianna Russini put a microphone in the face of a player who was angry with the refs.

The XFL sideline interview is great "I'm just trying to get my fucking job done" pic.twitter.com/oIAsOH7nMP

Fans thought it was hilarious that a player had already cursed on live tv so early in the XFL season.

An f bomb during a sideline interview and a punt blocked for a TD in a 15 second span. This is the best league.

And there it is first Fbomb on the sideline interviews. VINCE already losing money. #XFL2020 pic.twitter.com/lzMshu2cvN