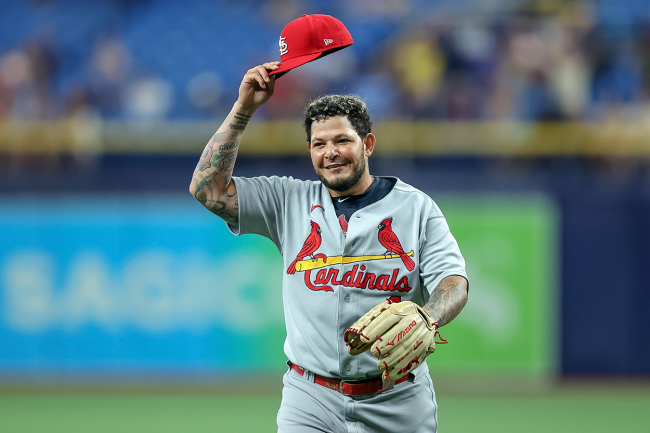 Whenever Yadier Molina decides to hang up his cleats, he will be a first-ballot MLB Hall of Famer and will go down as one of the greatest catchers of all-time. While his talent is one thing, Molina is also known for being a firecracker.

If you cross the Cardinals catcher, he will let you know how he feels. If you anger him, he will fight back.

To call him a “hot head” might not be the most fair assessment of who he is, but Molina is definitely chippy. Here are (more than) a few examples:

Molina is currently not with Saint Louis. He is coming back from a knee injury that has kept him out of action since June 16th.

In theory, Yadier Molina is home in Puerto Rico rehabbing his ailment. In reality, he is also taking advantage of his time off to watch some basketball, with the emphasis on the word “some.”

Molina owns the Vaqueros de Bayamón, a Puerto Rican basketball team of the Baloncesto Superior Nacional. He was in attendance on Saturday when things quickly took a turn.

After a questionable call was made in the third quarter of the game, Molina got up from his courtside seat and started to chew out the officials. He kicked a basketball in the process, which proceeded to get him ejected.

As Molina made his way out of the gym, he made sure to let the referees have it. He got right up in their faces and made his case before being escorted out.

Molina’s outburst was nothing out of the ordinary for him and the 40-year-old will not face any sort of repercussions other than being asked to leave. It was perfectly on brand.

For the Cardinals, there is a positive spin zone to come out of the incident. Molina did not appear to be limping and his knee held up when he kicked the basketball.

It could have been a lot worse!