This Grown Woman Screaming ’27 RINGS!’ At A Group Of Kids Rooting For The Red Sox Is PEAK Yankees Fan 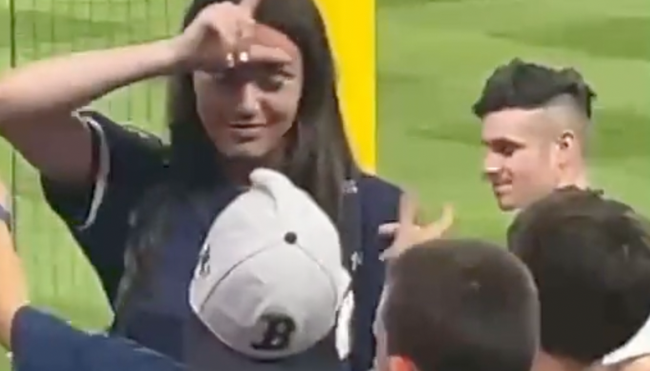 A lot of people point to the Steroid Era as the beginning of the end of baseball’s reign as America’s Pastime, but I’ve long maintained there’s another, singular event that sent Major League Baseball into a tailspin it’s never really recovered from: the Red Sox winning the World Series in 2004.

As a lapsed Red Sox fan who grew up in Connecticut, I got a crash course in tribalism’s impressive ability to foster an insane amount of irrational hatred courtesy of the New York Yankees fans that surrounded me. I was subsequently treated to enough heartbreak and misery over the course of my first decade on the planet to last multiple lifetimes, and to this day, I’m still chasing the elation I experience over the course of their storybook comeback against the Bronx Bombers in the ALCS and the subsequent sweep of the Cardinals.

It’s almost impossible to appreciate just how vitriolic the rivalry between those two opposing teams was prior to that point unless you had some skin in the game around the time Pedro Martinez tossed a 72-year-old Don Zimmer to the ground during a brawl.

I learned plenty of words my virgin ears had never been exposed to during many heated exchanges I witnessed between members of opposing fanbases during my time watching the two teams face off in person—almost all of which featured a Yankees fan reminding everyone how many World Series rings the team had won.

That number increased with far more frequency than I would’ve preferred over the course of my childhood. However, the Yankees haven’t won a World Series since taking home their 27th championship in 2009, and based on how the team is currently looking, it seems doubtful they’ll finish the season with a 28th.

I couldn’t tell you the last time I went to a game between the two squads, but it appears some people are doing what they can to keep the rivalry alive based on a video that surfaced following their series over the weekend featuring a Yankees fan getting into it with a group of people rooting for the Red Sox.

That wouldn’t normally be a super notable development, but I think this is a special case when you consider the Yankees fan in question is a grown woman who couldn’t stop herself from getting into an argument and repeatedly screaming “27 RINGS!” at a group of prepubescent Boston supporters.

Reply to @dominic_lopes thought the video was longer but ig pt.2

I don’t know if it’s possible to top the insufferability of Notre Dame fans who will only stop clinging to the past when you pry it from their cold, dead hands, but props to her for giving them a run for their money.