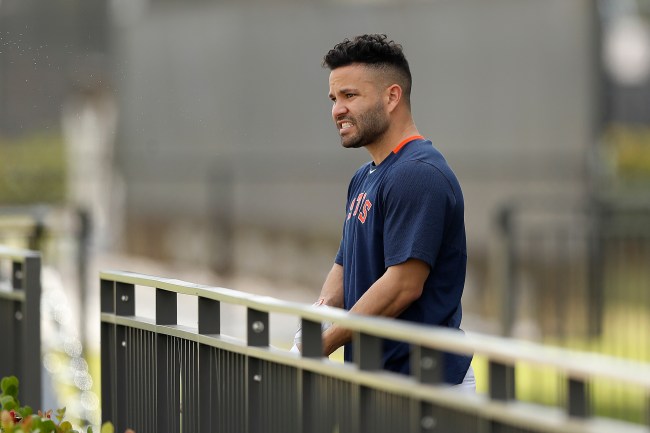 It is going to be a LONG season for the Houston Astros organization. They are cheaters. There’s no denying that. The MLB investigation discovered an elaborate system of cheating employed by the players to influence the game and they will forever be known as cheaters no matter where they go in life.

MLB commissioner Rob Manfred still has time to fix this situation and hand out severe punishments to the players and strip the team of their tarnished World Series titles…but he won’t. Vegas has already set the Over/Under on Astros players getting plunked at 83.5 times this upcoming season whereas last season teams were hit by an average of 66 pitches throughout the season. People are pissed.

Some fans will have to take vigilante justice into their own hands and it has already started with one brave soul in Florida’s Spring Training who showed up to Houston Astros batting practice to bang a trash can as Jose Altuve, Carlos Correa and Alex Bregman took batting practice. Later, in a display of true heroism, this Yankees fan shouted ‘cheater’ as Jose Altuve trotted by.

I know the saying goes something like ‘not all heroes wear capes’ but this is Florida, after all, so there’s really no telling of whether or not this amped up Yankees fan was wearing a cape.

If I’m an AL West season ticket holder I’m spending the next several weeks brainstorming ways to inflict the maximum amount of mind-fuckery on these Astros players every time they show up in town. Every baseball fan in America has a responsibility to let these players hear it every time they take the field. That or everyone can shut the fuck up about the Steroids Era or Pete Rose’s gambling forever because they were PROVEN TO HAVE CHEATED and not a single player was punished. It’s reprehensible.