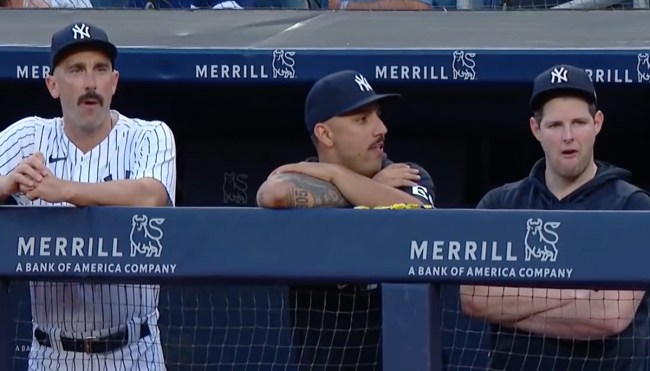 Like many kids, I dreamed of becoming a professional athlete when I was growing up before being forced to accept the reality that I’d peaked in every single sport I played before I hit puberty.

If I could do it all over again, I’d probably decide to focus on one athletic activity instead of spreading myself thin in the hopes of eventually being able to land what I consider one of the more enviable jobs on the planet: serving as the bullpen catcher for a Major League Baseball team, which seems like one of the cushier gigs in all of sports.

Sure, you might not make as much as the guys who are throwing to you, but you also have to deal with infinitely less pressure than the players who routinely see action. With that said, being a pitcher in the MLB seems like it’d also be a pretty sweet gig compared to what other pro athletes have to deal with on a regular basis.

There aren’t many things that highlight that fact quite like a scene that unfolded at Yankee Stadium on Tuesday night when the Bronx Bombers hosted the Athletics.

It didn’t take long for the actual game to take a backseat to a game that Nestor Cortes and Jordan Montgomery started playing in the dugout along with infielder Matt Carpenter.

Members of both broadcast booths were simultaneously captivated and revolted by a competition that involved the players throwing dozens of pieces of chewed bubble gum onto the field while trying to get them to land as close as possible to the cap of the drainage pipe they were using as a target (the best way to sum it up is probably “bubble gum bocce”).

The Yankees are really throwing chewed gum on the field 🤨 pic.twitter.com/uwfS1xaaF7

What a rough life.