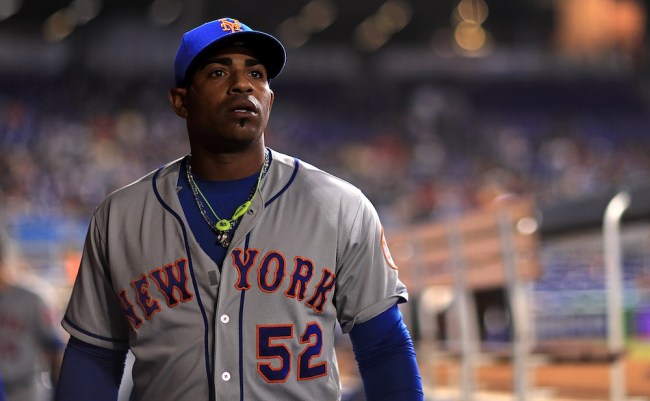 UPDATED: As first reported by Rich MacLeod of Transition One, Cespedes has opted out of the season.

When Yoenis Cespedes didn't show up today, the Mets sent security to his room. They found it empty. He had taken his belongings, just up and left, and through his agent informed the team mid-game that he was opting out, according to Mets GM Brodie Van Wagenen.

New York Mets outfielder Yoenis Cespedes failed to report to the ballpark for Sunday’s game against the Atlanta Braves in Atlanta.

The team issued a statement saying they “do not know where Cespedes is and that attempts to contact him have been unsuccessful.”

BREAKING: The Mets don't know where Yoenis Cespedes is.

Team statement: "As of game time, Yoenis Céspedes has not reported to the ballpark today. He did not reach out to management with any explanation for his absence. Our attempts to contact him have been unsuccessful."

Team statement: “As of game time, Yoenis Céspedes has not reported to the ballpark today. He did not reach out to management with any explanation for his absence. Our attempts to contact him have been unsuccessful.”

First pitch for the Mets and Braves was at 1 p.m. ET.

The team released the Cespedes news in the first inning to reporters after Cespedes was not in the lineup.

Not long after, Ken Rosenthal of The Athletic reported that “the team does not believe the outfielder’s safety is at risk.”

Mets have learned they have no reason to believe Cespedes’ safety is at risk, according to a source with knowledge of the situation.

There is still no word as to whether the Mets organization or Cespedes has spoken yet.

People are wondering how the organization knows about Cespedes safety if they a) haven’t heard from him and b) don’t know where he is and c) why make a statement at all.

Mets try to shame Cespedes through the media for not showing up, the internet jokes then assumes the worst, blows up in Mets faces & they issue another statement that he’s safe but they haven’t spoken, internet asks how they could know that if they can’t contact him, Mets PR 101

not commenting on the Cespedes thing until his welfare is assured and the facts are known, which makes me more responsible than *checks* the New York Mets

If the Mets had no reason to believe safety was at risk, one could reasomably assume that the earlier statement was sent with intent to shame Yoenis Cespedes. https://t.co/E7oNmTHg6Y

According to Rich MacLeod of Transition One Sports, Céspedes opted out of the 2020 MLB season last night.

Hearing that Yoenis Céspedes opted out of the 2020 MLB season last night, explaining his “absence” today.