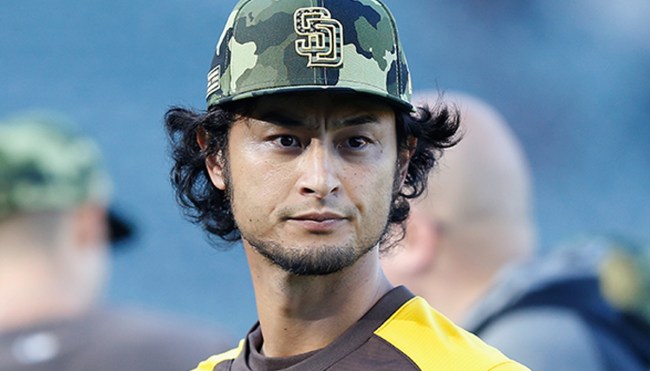 It’s not exactly rare to see a baseball game be impacted by bad weather, and while there’s a reason “rain delay” is practically synonymous with those postponements and suspensions of play, there are some other inclement conditions that can lead to things being derailed every now and then.

That was the case in Chicago on Monday night ahead of a showdown between the Padres and the Cubs. Rain did play a role in the decision to push back the start of a contest that was scheduled to kick off at 7:05 P.M. by 85 minutes to 8:30, but I have a feeling most people were more concerned with the tornado warning the National Weather Service issued early in the evening.

A #tornado watch has been issued for northeast #IL until 11 PM CDT. This includes the Chicago metro area. Tornadoes, large hail, and severe winds will be possible this evening. For the latest warning information follow @NWSChicago pic.twitter.com/OZciWveD3a

However, “concerned” is the last word I’d use to describe Yu Darvish’s reaction to that development.

Shortly after tornado sirens began to blare around Wrigley Field, Padres beat writer Kevin Acee tweeted out a fairly surreal clip showing the San Diego pitcher casually going through the motions after refusing to let a pesky supercell interfere with his pregame routine.

Yu Darvish is the only one in Chicago not taking shelter. pic.twitter.com/4RilXC05Pg

Acee spoke to Darvish after the game and asked him about his decision to keep doing his thing after fans, staff, and his fellow players opted to seek shelter, and the former member of the Cubs said he opted to use the moment to do some reflecting:

“That was kind of a little bit of a sentimental moment for me.

The tornado warning came in and everybody left; the fans left the stands. It was a moment between myself and Wrigley Field.”

It appeared to work out pretty well for him, as Darvish only surrendered a single run over the course of eight innings and secured credit for the win after the Padres walked away with a 4-1 victory.