2021 Spelling Bee Champion Zaila Avant-garde Will Cross You Up On The Blacktop, Became First Black American To Win 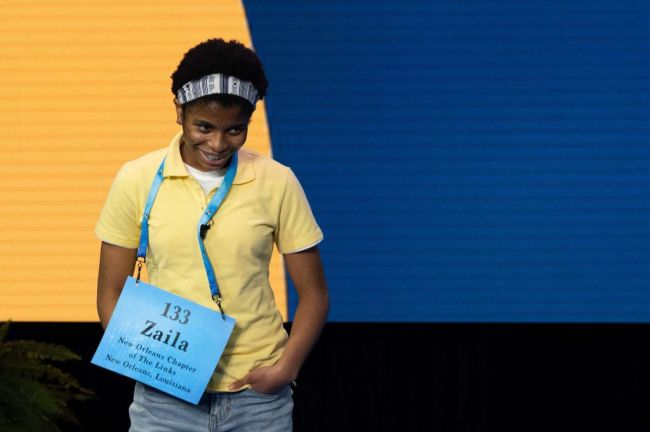 Zaila Avant-garde became the first Black American and first Louisianan to win the Scripps National Spelling Bee on Thursday. The 14-year-old from New Orleans is not only a brilliant mind in the classroom, but she will make you look silly at recess.

Avant-garde’s road to victory saw her spell the following words:

The first African-American winner of the competition 👏 pic.twitter.com/y2Y5dAGcVN

Prior to crowning Avant-garde champion, runner-up Chaitra Thummala misspelled “neroli oil” in the 17th round.

In the 93-year history of the storied competition, there have only been two Black winners. Jody-Anne Maxwell of Jamaica won the event in 1998 and is still the only winner from outside the United States.

It was an impressive and historic win for the New Orleanian eighth-grader, especially considering that she only started spelling competitively two years ago and finished tied for 370th in 2019. Most competitors train their entire childhood.

Don’t test her in the classroom or on the blacktop.

Everything Avant-garde does is a success. Not only is she winning the highest honor in spelling after just three years of competition, but she will break your ankles on a basketball court.

Oh, and she holds not one, but three world records for dribbling.

She has also appeared in a commercial with Steph Curry, read 1,000 chapter books by the time she turned 13 and has a passion for archaeology.

Needless to say, Avant-garde is the most interesting 14-year-old in the world with huge aspirations. She hopes to attend Harvard and go on to play in the WNBA.

When her playing career is over, Avant-garde hopes to coach in the NBA or work for NASA. No. Big. Deal.

While that seems like an outlandish dream to most, she is well on her way. Harvard is a virtual lock at this point and hooping on an athletic scholarship is a (more than) legitimate possibility.

Look at her putting in the work. The handles are nasty and she doesn’t miss.

If you aren’t sold yet, watch these highlights from her sixth and seventh grade seasons.

🏆🏆🏆 6th & 7th grade #Highlights. Wait 'till you see her now , ⚡️💨🤯#waayyybetter. Been working like usual. [For more extensive highlights check out her Instagram page: @basketballasart]. 🖖🏀 pic.twitter.com/xkUcgtvSXW

Finding time to spell between basketball and school.

Despite her monumental victory, Avant-garde said that the bee was not her top priority. She wants to go to the league.

“Spelling is really a side thing I do,” she said to the Associated Press. “It’s like a little hors d’oeuvre. But basketball’s like the main dish.”

Even still, Avant-garde found time to spell 13,000 words per day, she told NOLA.com. It takes her about seven hours, but she says that she doesn’t let it go too overboard.

We have different definitions of “overboard,” but Avant-garde is way more impressive than I could ever aspire to be and I digress.

Avant-garde won the title of World’s Greatest Speller on Thursday. She made history for her state and her country and will only continue to do so.

To make her win even better, she slipped in a Bill Murray reference that made the judges crack smile.

Everything about Zaila Avant-garde is a delight and I can’t wait to see the great things she will accomplish.

Alright, back to the mixtapes.

Catch me watching Zaila Avant-garde highlights for rest of the night 😮‍💨 pic.twitter.com/wnTXvtqLfP