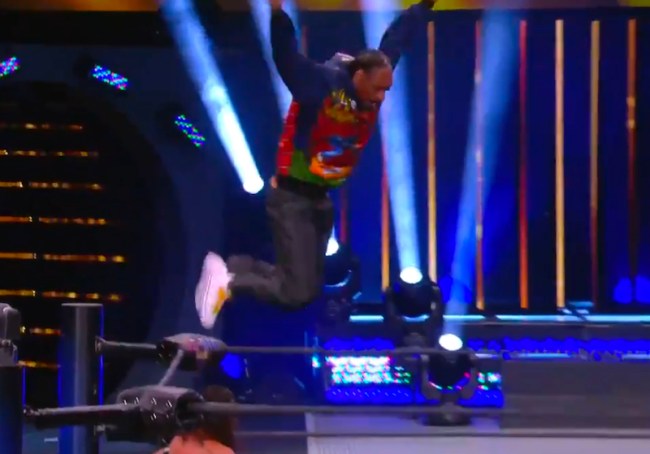 In case you missed last night’s episode of AEW Dynamite on TNT, rap legend Snoop Dogg accompanied his “Go Big Show” co-host, Cody Rhodes, to the ring for his match against Matt Sydal.

.@CodyRhodes enters the arena with a special guest, @SnoopDogg!#AEWDynamite is available on https://t.co/zvOOm4JoWK in select Intl markets from #FITE pic.twitter.com/FdEUkgv4I2

During the match, Cody accidentally punched Serpentico on the outside of the ring. After the match, Serpentico and Luther immediately attacked Cody with Sydal making the save.

Snoop Dogg wanted to get involved to help his friend and co-host and hit Serpentico with a…ummm…”flying splash” off the top rope.

The 6’4″ Snoop Dogg was less-than-agile climbing the ropes and his standing straight dismount was even more awkward.

SNOOP FROM THE TOP ROPE!!!! 🐸pic.twitter.com/UQGUC64HZi

While fans were impressed that the 49-year-old performer would attempt such a move, people couldn’t help but poke fun at the Dogg’s finishing move.

Why @SnoopDogg look like he’s playing Double Dutch trying to figure out when to jump in. 😂🤣😂 pic.twitter.com/4JTrR8Zx8q

That was soooooo bad!!! 😂🤣#AEWDynamite pic.twitter.com/bfzF4rzHiu

Even Snoop Dogg’s cousin, WWE Smackdown Women’s Champion Sasha Banks, had a little fun at her family member’s expense. “The Boss” tweeted out her reaction to cousin Snoop going airborne.

“Fam, we’re going to have to work on this,” she wrote, along with two crying and one laughing emoji.