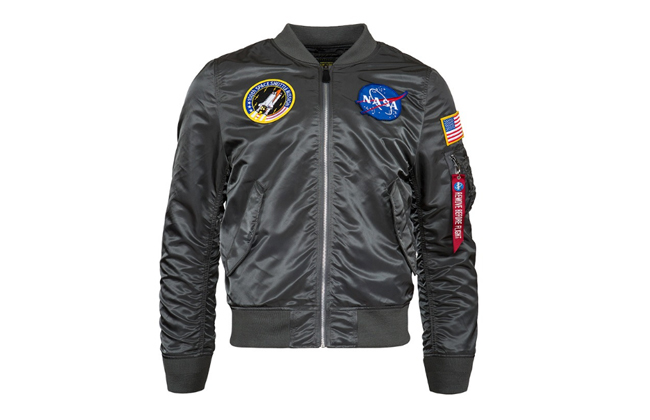 Every kid dreams of being an astronaut. Yeah, it’s not happening. Few of us are smart enough, brave enough or slightly crazy enough to get launched into outer space.

That’s fine. We can stay safely on the ground, wear this sick NASA L-2B bomber from Alpha Industries, and just look like we went through all the training.

Here’s the history of the NASA flight jacket from the designers:

“The L-2B flight jacket was introduced in the early 1950s for use in light temperature zones (50 to 86 degrees F). Initially the bomber was only used by the U.S. Air Force which is why the USAF insignia was put on the sleeve. The flight jacket went through many specification updates including the removal of the oxygen tab, snap tabs and epaulets, along with the USAF logo as the jacket was eventually adopted by the Navy and other branches of the armed forces.”

That’s all cool but when can we test shuttles?!?! Oh right. I forgot about the “being smart” thing. Well, we can be smart enough to know when we see a dope jacket. That counts for something, right?

The BroBible team writes about gear that we think you want. Occasionally, we write about items that are a part of one of our affiliate partnerships, and we may get a percentage of the revenue from sales.