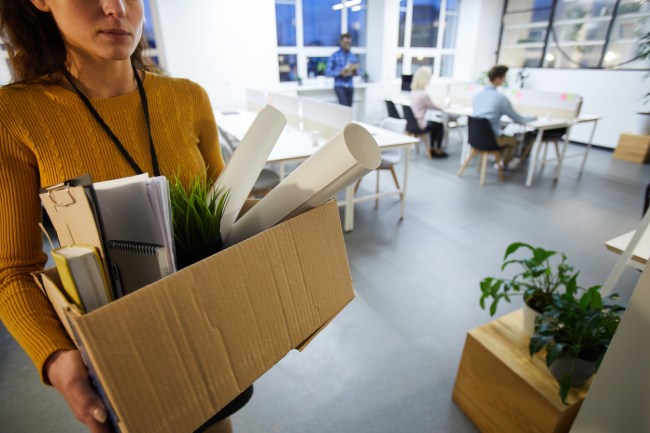 While there are millions of U.S. job openings in the current economy, there are also millions of American workers considering quitting their jobs in a phenomenon called the “Great Resignation.”

People have been given more time at home during the pandemic, some with greater work-life balance. Now, many Americans are reconsidering their current employment status. And according to a new study, a “great resignation” movement is about to happen.

According to a new Microsoft study titled “The Next Great Disruption Is Hybrid Work,” 41% of workers globally are thinking about quitting their jobs.

Gen Z is especially ready to hand in their two weeks notice – 54% of workers ages 18-25 are considering quitting their jobs, which could be from beginning their professional careers in such unusual times.

“Our findings have shown that for Gen Z and people just starting in their careers, this has been a very disruptive time,” says LinkedIn Senior Editor-at-Large George Anders. “It’s very hard to find their footing since they’re not experiencing the in-person onboarding, networking and training that they would have expected in a normal year.”

The study also found that 46% of the workforce planned to move because they have the flexibility of remote work.

“Over the past year, no area has undergone more rapid transformation than the way we work,” Microsoft CEO Satya Nadella said in the report. “Employee expectations are changing, and we will need to define productivity much more broadly – inclusive of collaboration, learning and wellbeing to drive career advancement for every worker, including frontline and knowledge workers, as well as for new graduates and those who are in the workforce today. All this needs to be done with flexibility in, when, where and how people work.”

A Prudential survey found that 42% of employees would quit if their company didn’t offer remote working options long term.

“People have had a little more space to ask themselves, ‘Is this really what I want to be doing?'” So some are deciding they want to work fewer hours or with more flexibility to create more time for family or hobbies,” University of Michigan economist Betsey Stevenson told Axios.

A possible reason that so many Americans are considering quitting their jobs in the great resignation is that there are so many job openings right now. According to the U.S. Bureau of Labor Statistics, there were a record 9.3 million job openings as of the last day of April.

“Quits, which are seen as a gauge of worker confidence that they can find other employment, rose considerably, to 3.95 million,” CNBC reported. “That represented growth of 384,000, an increase of 10.8% that took the quits rate as a share of the labor force up to a record 2.7% from 2.5%.”

“This recent surge in openings suggests that firms are having a hard time filling positions, and the number of quits reported in the JOLTS data also has surged largely, suggesting workers are able to find — or confident in their abilities to find — new positions,” saidJP Morgan economist Daniel Silver. “Both of these factors signal a need for firms to raise wages, and we have seen a variety of related measures pick up lately.”