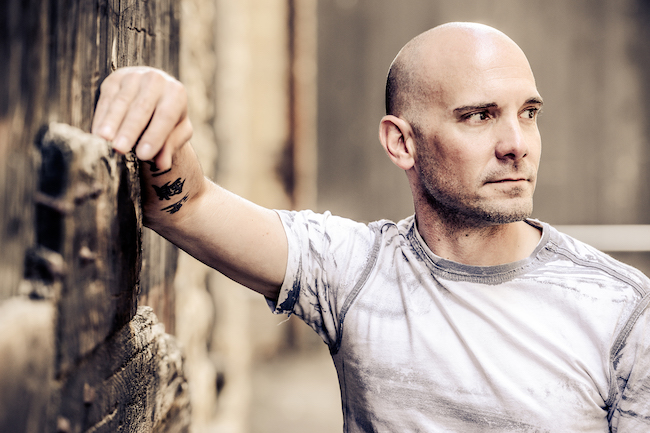 Entrepreneurs launch companies to fill specific needs, either their own or the population at large.

Scott Petinga launches companies because something pisses him off.

A serial entrepreneur, Petinga’s latest quest is less about building his net worth and more about raising awareness.

He’s on a mission to turn the month of February “baby blue” for men’s cancer awareness.

“More men are between the ages of 15 and 40 are dying of testicular cancer than any other type of cancer,” explains the Atlantic City, NJ native. “But there is no blue ribbon month to raise awareness and help increase funding like there is with other types of gender-specific types of cancer.”

According to cancer.net, an estimated 9,310 men in the US will be diagnosed with testicular cancer this year. For men ages 15-44, it is the most commonly diagnosed cancer. The average age of diagnosis is 33.

“Men between the ages of 15 and 40 need to be more vocal and get checked,” implores Petinga. “Men can’t fall victim to ‘Superman syndrome.’ Too many men don’t want to share their stories, but he believes the younger generation is more open and vocal about it than the older generations.”

Because of the location, and what a man goes through – physically and emotionally – it’s not considered manly to discuss these subjects. If you don’t react stereotypically, you’re not considered a man by society, and that causes many men to shut down instead of opening up and having conversations about it.

“I want to February to become Testicular Cancer Awareness Month for several reasons. February is World Cancer Day and it’s Cancer Prevention Month. There’s awareness around both of those events.”

“Over $5.2 billion per year goes to research for various cancer treatments,” explains Petinga, a serial entrepreneur and father of three. “But none goes to testicular cancer research. The disease is highly curable, but receives little to no attention due to having no research funding.”

Unhappy with the research done on testicular cancer, Petinga funded research of his own.

“As a survivor of testicular cancer,” he explains, “I’ve been battling for 14 years, both the cancer and the aftermath, so much so that we actually had to fund some of my own clinical research.”

Petinga recently launched two new products for men to help generate funds for research: underwear and condoms, where 50% of the proceeds go to fund research specific to men’s healthcare.

“It would take too long to wait for government or corporate America to fix these issues.”

“In every entrepreneur, there should be a little bit of ‘But why the fuck is that?’”

A 20-year vet at some of the biggest agencies in the country, Petinga depended on his annual bonus to fund in-vitro fertilization after chemo left him unable to have children. The company decided not to give bonuses that year.

Deep in medical debt and angry over his circumstance, he quit his job and started his own agency. The company would go on to make $1.9 million the first year and subsequently went on to earn $4.5 million the second year, and $6 million the third year.

Petinga gives another example of how his short-fuse in business lead to another venture.

My daughters and I took up golf as a way to spend quality time together. Unhappy with the golf gear made for kids, he started a golf T-shirt company specifically for children.

Be the ‘entrepreneur’ of your body

“Think of your body as a business,” explains Petinga. “You can’t ignore whatever is wrong and expect it to go away.”

Most male-specific diseases occur in the groin which makes it difficult to discuss in a casual conversation.

These specific creations just made sense for the overall goal.

“Putting on underwear or a condom is the perfect time to perform a quick self-check.”

The companies insert exam fliers in every package of underwear and condoms to demonstrate the importance of self-screening for testicular cancer.

Petinga has launched 10 companies overall, three of which are non-profits.

Cacti.org discusses the importance of monthly self-exams, helps people find specialists in the area and assists families of men suffering from testicular cancer.

ThinkDifferent.org is a humanitarian organization that provides grants and other program support designed to spark innovative ideas in underserved areas of housing and healthcare within the United States.

The Fairy Foundation is an organization that grants wishes for terminally ill people outside the Make A Wish age limit. The foundation recently granted the wish of a 50-year-old man who wanted to drive from one coast to the other to see his mother before he passed away.

Petinga admits that the foundations make him feel both fortunate but slightly melancholy, but the overall work fills him with a tremendous sense of pride.

“These men are able to find a happy place and have one last good moment with the people they love, and then an obituary arrives a few months later. Some days it’s hard because I’ve gotta read these stories. They send photos. These men look like me. They’ve got young kids like me. They’re here and healthy and all of a sudden, they’re gone. Often times I’m connected to them, on the Facebooks of the world, so I see their kids grow up, and they can’t.”

Petinga has personally donated half a million dollars to testicular cancer and hormone replacement research.

Aside from a slew of successful businesses, Petinga also wrote a book – No One Ever Drowned in Sweat: G.R.I.T. – The Stuff of Leaders and Champions.

Petinga approaches the creation of each new business as an instigator. “I enjoy sticking a stick in the beehive and shaking it around.”

His single piece of advice for anyone looking to instigate is to ask a simple question.

“The best advice I can give anyone interested in doing their own thing is to always ask the biggest question — Why? Why are we doing the things that we do as a society? People who follow the status quo, and never ask the question ‘why?’ end up miserable. In every entrepreneur, there should be a little bit of ‘But why the fuck is that?’”