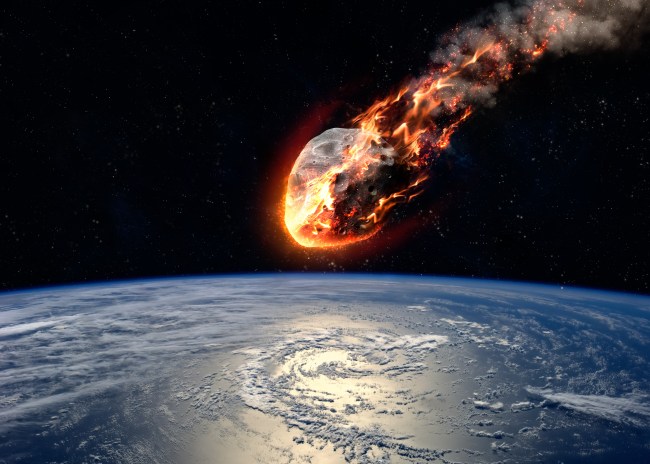 I’m not trying to ring the alarm here or add unnecessary drama to the event, but like, holy shit, an asteroid the size of a football field could have wiped out me, you and our grandmothers early Sunday morning.

Astronomers at the Steward Observatory Catalina Station in Arizona detected the massive boulder just a few hours before its flyby, which clocked in at a speed of 66,174 mph. The asteroid, named 2018 GE3, was estimated to be about 360 feet in diameter and is the largest known asteroid to ever drift so close to Earth.

Asteroid 2018 GE3 flew past us today, half the distance to the Moon. Around 50-100 m in diameter, it was several times the 2013 Chelyabinsk meteor, around the size of the 1908 Tunguska event ~ easily enough to destroy a city. We had less than a day's warning. (📷 Michael Jäger) pic.twitter.com/kElrxBiUoB

The next day it tore past without incident, brushing within 192,317 km of our upper atmosphere. And sure, that sounds like a healthy margin for error, but keep in mind that space is infinite and the moon is just 400,000 kilometers away.

So what would have happened if it’d hit us? Well, as a fun game of comparative speculation, the meteorite that exploded over remote forest in Russia in 1908, known as the the Tunguska event, is thought to have been between 60 to 190 meters in diameter. It didn’t kill anyone, but that’s only because the area was basically unpopulated. And it did flatten about 200 kilometers of pine trees.

The 2018 GE3 was roughly 3.6 times the aforementioned asteroid and was estimated to have produced about 185 times more energy than the Hiroshima atomic bomb.

So this leads us to the question of how no one spotted this speeding boulder until it was just a few short hours away. The answer is what you’d think it’d be: Asteroids are small and dark and may not reflect enough light for an optical telescope to spot it, Live Science reports. The largest known asteroid is Vesta, which spanned across 329 miles.

Moral of the story: go out tonight and have a beer. Shoot your shot with a single lady. An asteroid could hit your backyard at any time.