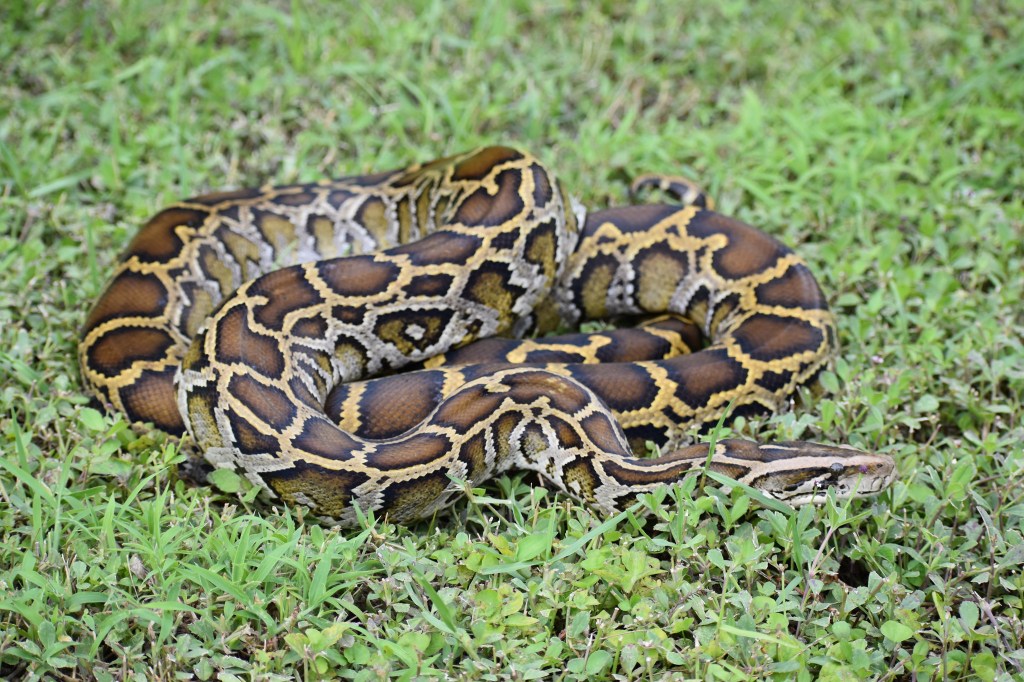 The 2021 Florida Python Challenge just wrapped up and they caught some massive snakes this year. It is an annual competition held by the Florida Fish and Wildlife Conservation Commission (FWC). The goal is to remove as many Burmese Pythons from The Florida Everglades as possible as they’re a dangerous invasive species.

Brandon Call caught the biggest snake in the event, that one measured 15 feet and 9 inches. Brandon took home $1,500 for that snake by winning the Longest Python Grand Prize for the Novice Category. Dusty Crum won the Longest Python Grand Prize ‘Professional’ Category with another massive snake. Crum’s snake measured 15 feet and 5 inches long, just 4 inches shy of the biggest one caught in the event.

The Florida Fish and Wildlife Conservation Commission (FWC) shared a ton of pictures from the event on Flickr and on their Twitter account. Here are some of the highlights:

Kudos to participants of the 2021 Florida #PythonChallenge® for removing 223 invasive Burmese pythons from the Everglades ecosystem: https://t.co/4AWMFNacq4 #Florida #winners pic.twitter.com/IZkDwg0xMF

In first place in the “Novice” category for the longest #python captured, the winner is Brandon Call. The length of the python captured to win this award was 15 ft. 9 inches. #FWC2021 pic.twitter.com/LZzIxJB3qT

In first place in the “Professional” category for the longest #python captured, the winner is Dusty Crum! The length of the python captured to win this award was 15 ft. 5 inches. #FWC2021 pic.twitter.com/BTCNn85hu0

Finally, the person who removed the most #pythons overall, receiving the 🏆“Ultimate Grand Prize” of $10,000 💰 is… CHARLIE DACHTON, removing 41 pythons! #FWC2021 pic.twitter.com/F6vMrbzk5n

First place in the “Novice” category for most #pythons removed is Tom Hobbs! He was able to remove a total of 6 pythons during this competition. #FWC2021 pic.twitter.com/HlnbNiNPLj

Imagine getting paid ten grand for catching a snake when catching this invasive species and removing it from The Everglades is already a thrilling experience. It’s like getting paid to eat ice cream or ride roller coasters. 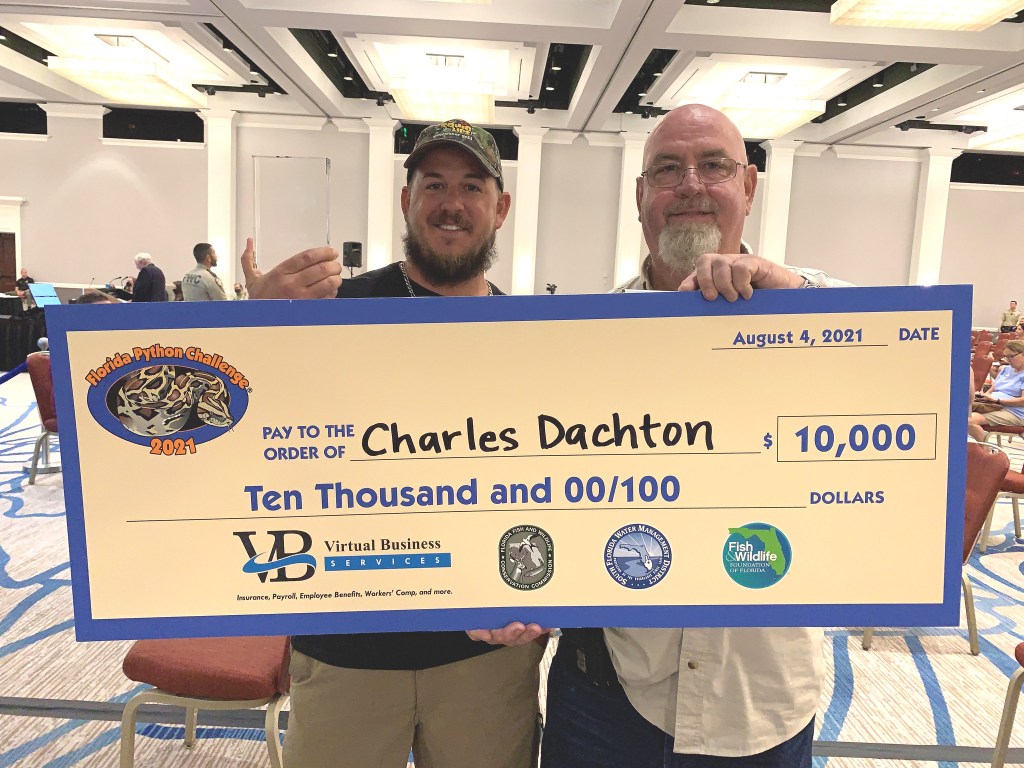 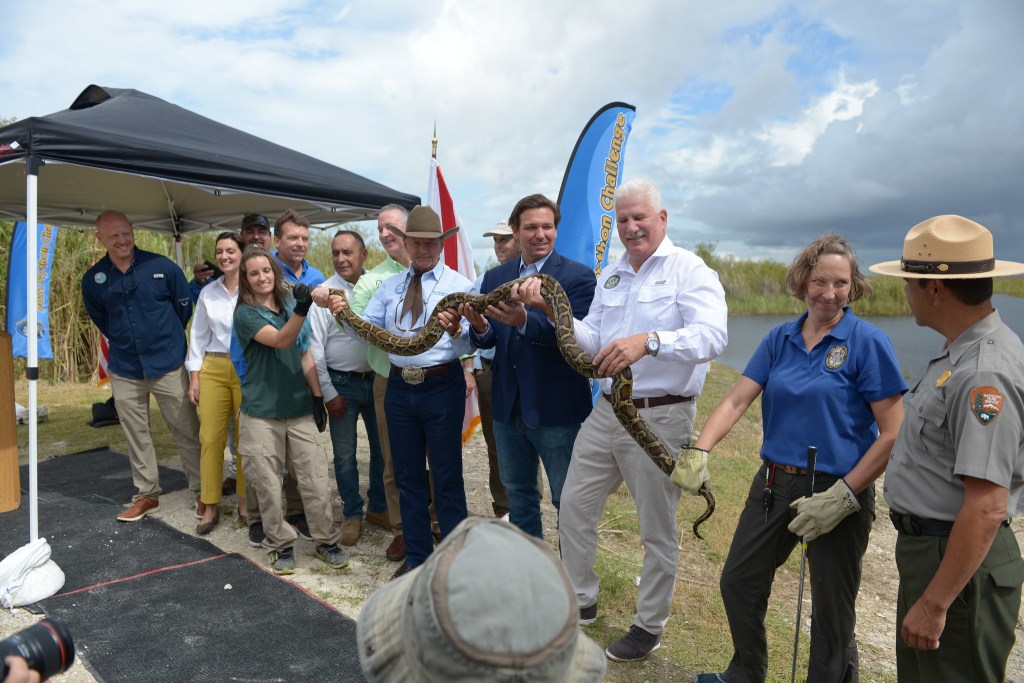 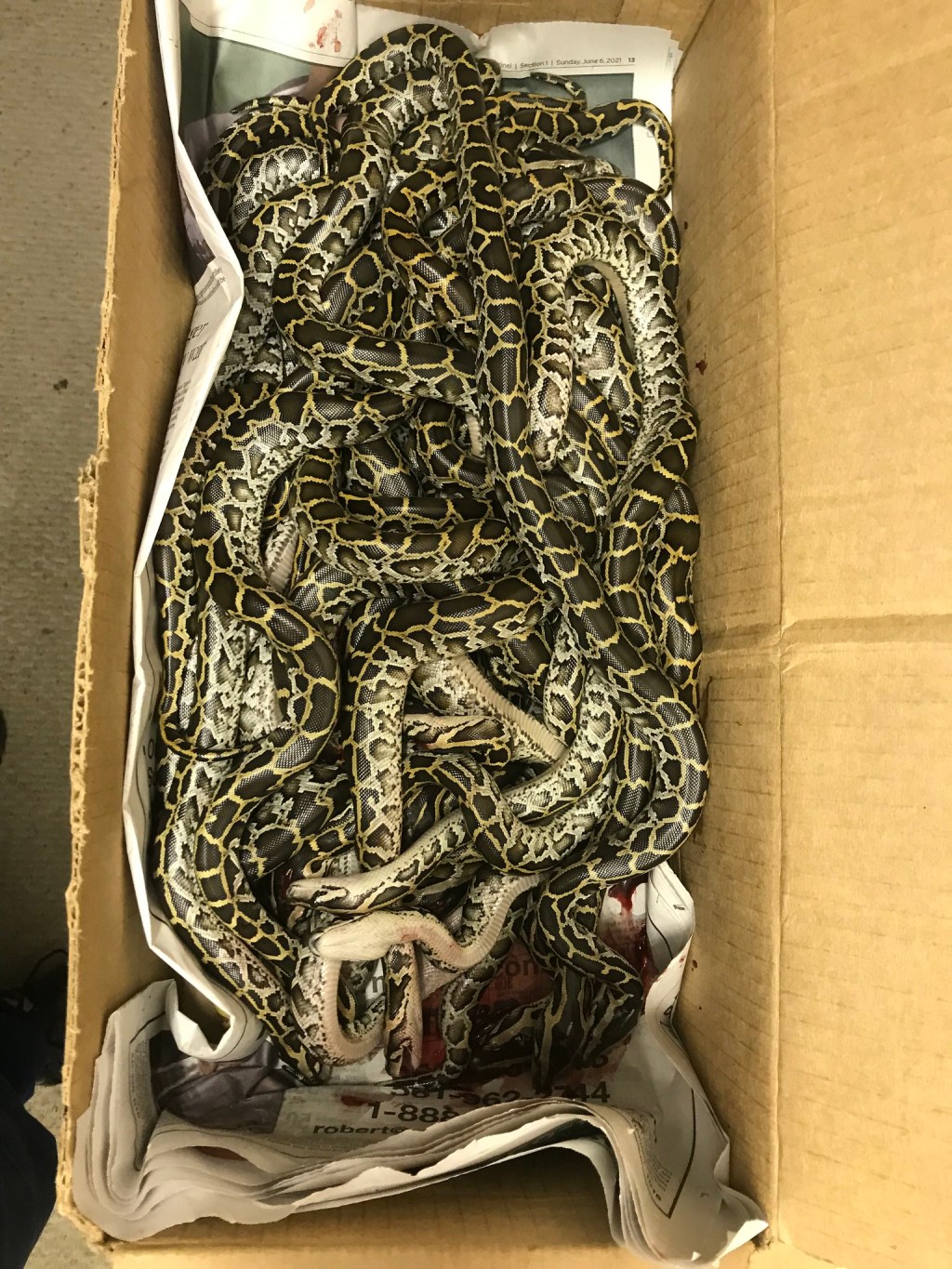 A single Burmese Python, which are non-native to Florida, can lay anywhere from 50 to 100 eggs at a time. They are virtually impossible to find in The Everglades when they don’t want to be found because their camouflage is darn near perfect. Since 2000, over 13,000 of these invasive snakes have been removed from The Florida Everglades but there’s no telling how many more are out there.

If you are interested in participating in the 2022 Florida Python Challenge it’s really not that complicated to get involved. You will need to check out the free Online Training Module and pass their test with an 80% before you register and the training only takes 30 minutes. Then it’s $25 to register, or it was for 2021. I’d assume the price will be the same for next year’s Florida Python Challenge as well.