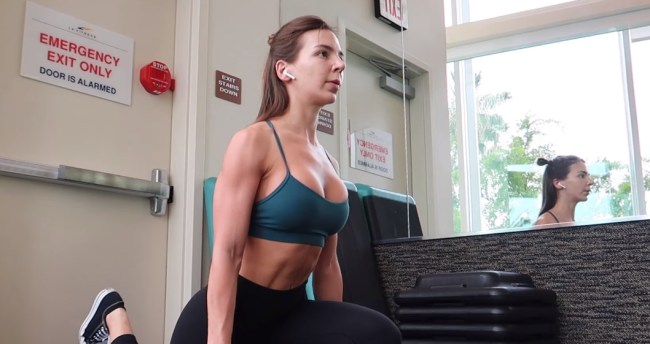 90 Day Fiance star Anfisa Nava was never overweight, but never-the-less she has made an incredible body transformation to get ultra-lean and extremely toned. The reality TV star has put such an emphasis on her fitness that she even started competing in bodybuilding competitions. However, some bodyshamers are saying that her new physique is “too muscular.”

Before she met and married Jorge Nava and appeared on 90 Day Fiancé, she was Anfisa Arkhipchenko from Moscow, Russia. Anfisa has adjusted to American life quite well, despite her husband being arrested and sentenced to 2.5 years in jail for possession of drugs. On February 12, 2018, Jorge was stopped by police and he had 293 pounds of high-grade marijuana in his trunk of his car, a class two felony that his lawyer got reduced to a class four felony.

Without her husband in her life, Anfisa has put her energy and focus on her fitness. She decided to become a competitive bodybuilder and has really put in the work. Anfisa shredded the pounds and built muscle with a low-carb diet and rigorous workout regimen.

After a few months, her transformation to competitive bodybuilder was complete and she was ready to compete.

When you start to Excel, people start to spreadsheet.

On June 22, Anfisa entered the NPC West Coast Classic, for which she lost 26 pounds. Anfisa wrote on Instagram: “SO excited to have gotten first call outs in all three classes I did!!! Can’t wait for the finals tonight! Thank you coach @paulrevelia and @teamprophysique for the footage and for your support! Pls remind me to wear earrings though.”

Stayed up until 5am re-watching videos from last night at #NPCwestcoast @centerpodium and reading your comments! So overwhelmed with joy and excitement! Woke up thinking I slept a long time but it's only 7.40am😂 So here's my solo posing from the finals! A little rushed as I was nervous. 😬Can't wait to see what @paulrevelia and I are going to bring to the stage next time. 🔥 #WestCoastClassic #NPCwestcoastclassic

Despite her success, there were some bodyshamers who said that Anfisa had “become too muscular.”

Some of the bodyshaming comments included: “Why does woman wants guys muscles and abs” and “Damn… you look like a dude! Time to stop.”

“You’re by far the hottest of all the ’90 Day Fiance’ women. Just don’t get too muscular, keep your beautiful femininity,” one user wrote.

While others asked if she had an “eating disorder.”

“You look amazing but me personally don’t like to much [sic] muscle on a woman. But it’s my opinion,” someone said online. “You looked good before putting so much muscle in your arms and legs. But you look cute just the same!!!”

Anfisa responded to the bodyshamers by saying that she has “never felt more feminine and happy than I do now” in an Instagram post.

“They say “Muscles make you look manly”… I personally have never felt more feminine and happy than I do now. It’s all about how you feel on the inside and not what you look like on the outside. All shapes and sizes can be beautiful as long as you live in harmony with yourself.”

They say "Muscles make you look manly"… I personally have never felt more feminine and happy than I do now 🥰 It's all about how you feel on the inside and not what you look like on the outside. All shapes and sizes can be beautiful as long as you live in harmony with yourself. 📸: @bluelineefex #mshealthandfitness19

Just got professional photos from the last show so of course I had to share ☺️ Since I got serious about my fitness goals my following grew quite a bit and became more diverse so I want to let you get to know me better! Here are 10 facts about me, 3 of which are not true 😏 Can you guess which ones are real and which are not? The first person to guess will get a shout out on my stories 🎉 1. I have 1 tattoo 2. I love assembling furniture 🔨 3. I used to be a belly dancer 4. I love avocados 🥑 5. My favorite music is reggaeton 6. I speak 5 languages fluently 7. I dyed my hair blonde when I was 13 👱🏻‍♀️ 8. I never wear perfume 9. I have a cat 🐈 10. I don't drink alcohol 🍷 Let's see who knows me best ☺️