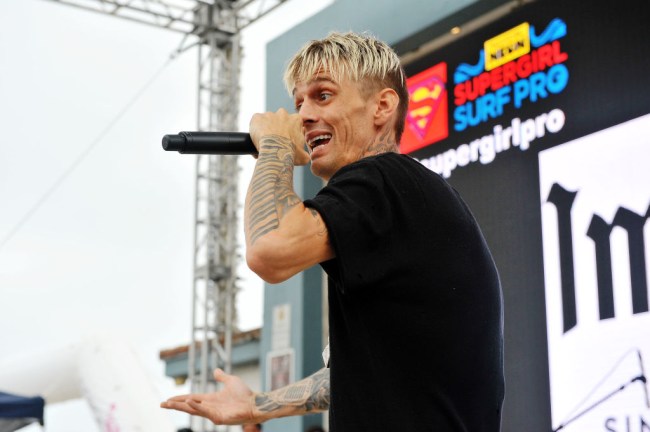 Aaron Carter got a huge face tattoo last week, but his tattoo artist initially tried to talk the singer out of getting the large Medusa ink on the side of his face. In fact, Carter actually wanted even a larger tattoo.

Carrasco went to Carter’s home last Friday, where he was initially supposed to add more ink to Aaron’s current tattoo on his torso. However, once Carrasco got to Carter’s house, the singer told the tattoo artist that he wanted a massive face tattoo.

And not only did Carter want a face tattoo, but he originally wanted the body art in the middle of his face. Carrasco attempted to talk Carter out of the massive face tattoo, but the 31-year-old singer insisted on getting the ink done and paid the tattoo artist $5,000 for the ink.

“[Carter] wanted to keep going and I had to stop him,” Carrasco said. “I couldn’t cover his whole face in a tattoo. I just couldn’t.” They compromised on Carter getting ink on the side of his face, from his neck to the top of the temple of his head.

“Before I tattoo anyone, I take into consideration their mental state,” Carrasco told TMZ. “In Aaron’s case, I assessed the situation and I genuinely felt he was in a good place mentally to get tattooed.”

At the time of getting the tattoo, Carrasco believed that Carter was not under the influence of any substances other than marijuana.

Carrasco had done face tattoos in the past, including some of the ink of Tekashi 6ix9ine’s forehead, which will make it near impossible to be hidden in the witness protection.

The inspiration for Aaron Carter’s huge face tattoo was Rihanna’s Medusa-themed GQ magazine photoshoot back in 2013.

The tattoo came only days after Carter’s brother and sister tried to get a restraining order against the How I Beat Shaq singer. Aaron’s twin sister Angel Carter and his Backstreet Boys brother Nick Carter both got restraining orders against Aaron.