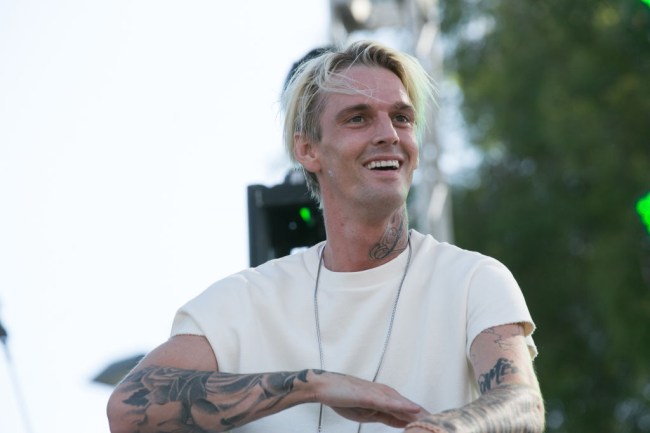 On Saturday, Carter revealed his giant face tattoo on Instagram. In several Instagram photos and videos, Carter showed off the new ink that appears to be Medusa, a female creature from Greek Mythology that had venomous snakes instead of hair that could turn humans into stone just by looking at them.

The tattoo is big enough that it goes from the bottom of his neck to above the temple of his head.

Carter, who is now 31-years-old, has had a turbulent few months with his family members. Aaron has been feuding with his twin sister Angel Carter and his Backstreet brother Nick Carter, both siblings recently got restraining orders against Aaron.

“In light of Aaron’s increasingly alarming behavior and his recent confession that he harbors thoughts and intentions of killing my pregnant wife and unborn child, we were left with no choice but to take every measure possible to protect ourselves and our family,” the 39-year-old Nick revealed. Nick also claims that Aaron hears “voices in his head.”

On Friday, Aaron tweeted and later deleted: “I WILL be showing up to court for my sister, Angel’s case against me. But I will not be going for my brother, Nick. I don’t care if he has a restraining order against me, I will never see or speak to him again or the rest of my family.”

Aaron has had a tumultuous relationship with many of his family members. Carter claimed that his late sister Leslie Carter sexually abused him when he was younger. Aaron also said that Nick abused him his “whole life” on the NoJumper podcast.

Carter filmed a video of police conducting a welfare check on him and shared the footage on Instagram Live.

On Saturday, Carter said he is “doing just fine” and “living my best life sweetie.”

“I ask you repent my and leave me alone,” Aaron said. “I already have to move and I don’t need to be under scrutiny with every decision I make. I will take the necessary precautions to protect myself, and when I move no one will know where I live! #MissingMyMom right now.”

Carter appears to be looking for a new lady friend and said, “Where’s my queen at!? I’m waiting on you.”