Aaron Judge To The Giants Is No Lock, Another Team Looms As A Sneaky Dark Horse Candidate 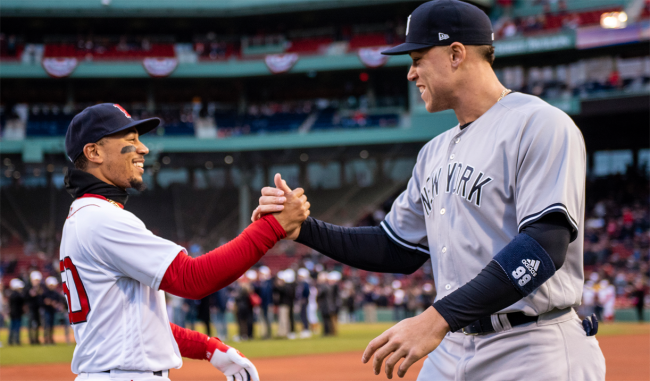 Despite the Giants putting on the full court press (with a little help from Steph Curry) to try and sign Aaron Judge they still are not the favorites to land him, according to one MLB insider.

Earlier this week, MLB reporter Jeff Passan claimed the Yankees had offered Aaron Judge a contract in the range of eight years and $300 million.

Many fans and pundits are of the belief that numbers like that won’t get it done.

Meanwhile, over in Northern California, where Judge grew up as a fan of the Giants, one former star there, Barry Bonds, and several players currently on the team like outfielder Joc Pederson, shortstop Brandon Crawford and starting pitcher Logan Webb are lobbying hard for the slugger to come play for San Francisco.

However, according to MLB insider Jon Heyman, the Giants are still behind the New York Yankees in the race to sign the big man.

“The clear No. 1 guy has only two known teams seriously in the bidding, no reflection on him and all about the dollars he’ll command — $300 million plus,” Heyman wrote this week for the New York Post. “(The Dodgers may have rare money concerns, and are focusing on pitching and shortstop.) The Yankees remain favored. But if he’s upset at the October booing, or possibly the spring offer (or team announcement of such), or prefers to be nearer his parents in Linden, Calif., two hours from San Francisco, he has a fine second option. Although, one rival exec doubts the Giants: ‘He’s going to leave the greatest market to go across country to a team where it’s hard to hit homers? Come on.’ Favorites: 1. Yankees; 2 Giants.”

Not so fast there on dismissing the Dodgers as a possible dark horse.

Dodgers’ manager Dave Roberts was recently asked about the chances of Mookie Betts shifting from outfield to second base so the team would have a spot open for Aaron Judge on the field.

“If he had his choice, yes,” Roberts told Jayson Stark of The Athletic. “He loves second base, so we’ll see. I think the main thing is opens and willingness… obviously you’re talking about a big right-handed right fielder that is a free agent that could play right field which would make that move make sense. So again, we’re keeping all options open.”

Mookie Betts to 2B in LA?

"He's open to it." And with a certain 62-HR RF available in free agency, "we're keeping all options open," Dave Roberts tells me & @dougglanville
on an amazing new Starkville.

Judge does look pretty good in Dodger blue, doesn’t he?