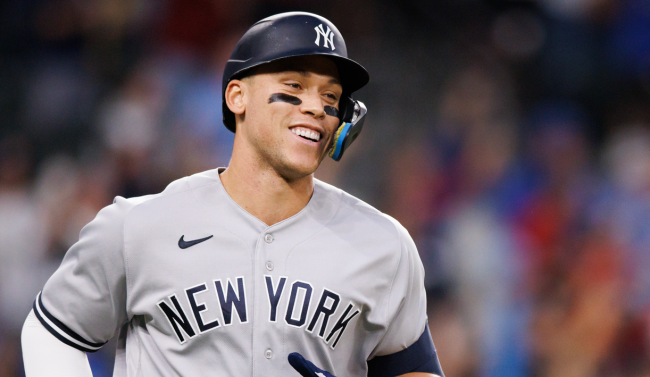 Joc Pederson shared a very aggressive recruiting message to Aaron Judge on social media just as the slugger has what is being called a “productive” meeting with the San Francisco Giants.

The 30-year-old Pederson, who recently accepted a one year, $19.65 million qualifying offer to return to the Giants, really wants the American League MVP to join him in the San Francisco outfield.

“I got 99 problems … winning ain’t one. We’re ready when you are @thejudge44,” Pederson wrote on Instagram over a photoshopped image of Aaron Judge in a San Francisco Giants jersey.

Judge, who grew up in Northern California as a fan of the Giants, reportedly had a “productive” meeting on Tuesday with the team, according to MLB Network.

The meeting came after he was spotted in the Bay Area Monday night and claimed, with a wink, that he was “just visiting some family and friends, that’s about it.”

My report on Aaron Judge for @MLBNetwork this morning — including his meeting with #SFGiants ownership. @MLB #MLBNHotStove pic.twitter.com/Coo5HbFqPR

“I’m told that the meetings went all the way up to the ownership level between Aaron Judge and the San Francisco Giants,” MLB reporter Jon Morosi said. “Very significant development there.”

Morosi added that he expects the Giants to make Judge an offer within the week.

Should that happen, Joc Pederson isn’t the only Giants player that will be very happy. Both shortstop Brandon Crawford and starting pitcher Logan Webb doubled down on Pederson’s message to Judge.

All of this news has Giants fans praying that Aaron Judge does indeed decide to come home to play next season.

“If Bonds is saying it and Joc is saying it, then do it Judge. Join the NL West, Join The Giants,” another fan tweeted.

“If Judge signed with us, there’s a good chance Rodón will return, because game recognizes game,” another fan wrote.

Of course, there is always the possibility of something like this happening…

It’s been a very good week for Judge. In addition to all the love he’s getting from San Francisco he also came in fourth behind, Chris Evans, Kendrick Lamar and George Clooney on People’s Sexiest Man Alive list.