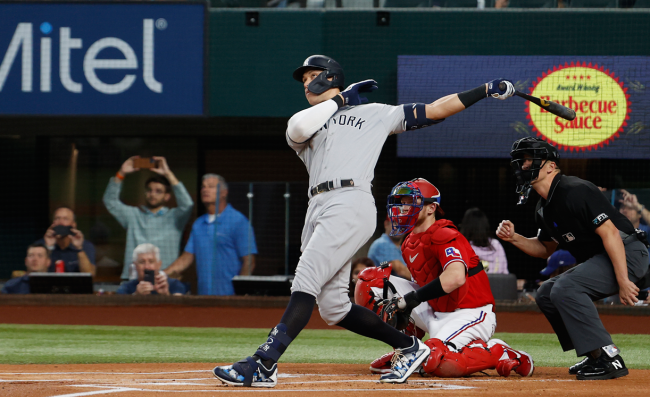 Aaron Judge was asked if he planned to bid on his record-breaking 62nd home run ball. His response was both funny as well as pretty wise.

Considering that particular baseball has been predicted to fetch up to $4 million when it hits the auction block, that’s no small investment.

If it does go for anywhere near that amount it would be a new record sale price for a game-used baseball. The current record is $3.05 million, set in 1999 for Mark McGwire’s 70th home run ball.

“The ball has the potential to become the highest-priced baseball ever sold,” auctioneer Ken Goldin told the New York Times. “Three million plus would be my estimate.”

Goldin will be the one responsible for auctioning off Aaron Judge’s 62 home run ball.

The proceeds of that sale will make Cory Youmans, the fan who captured that ball in the left field seats of Globe Life Field in Arlington, Texas on Oct. 4.

Interestingly, Youmans has already turned down one $3 million offer for the ball, so he is rolling the dice a little bit by putting it up for auction.

He claims he is doing it, not as much for the money, as for giving anyone who wants it a fair shot at getting it. Don’t forget, by putting it up for auction, Youmans will be forfeiting a chunk of the sale (20%) to the auction house.

“It seems fair in the sense it gives anyone that is interested and has the means the opportunity to own it,” said Youmans. “As a fan, I’m curious to see what it’s worth, who buys it and what they do with it.”

Will one of those people making a bid on Aaron Judge’s historic 62nd home run ball be Aaron Judge?

Considering it is being speculated that he is going to sign a new contract with some team this offseason worth something in the $300 million range, he certainly can afford it.

“Oh, no. I haven’t signed my free agent deal yet, so I think that’s a little out of my price range right now,” MLB reporter Bryan Hoch reported that Judge replied when asked if he planned to bid on the ball.

Paying $3-4 million for a baseball is never a good idea. Just ask the guy who bought the Mark McGwire ball.

Yeah, he's only made 40mil in his career, plus endless endorsement deals. He has to do "what's best for his family"

“Hal [Steinbrenner] needs to bid for it, offer him the captaincy and then give him the contract,” a Yankees fan tweeted.

Whatever team wants him should win that auction and give it to him at the press conference of his signing. That would be epic.

Now there is a fantastic idea.

The bidding is scheduled to end on Dec. 17