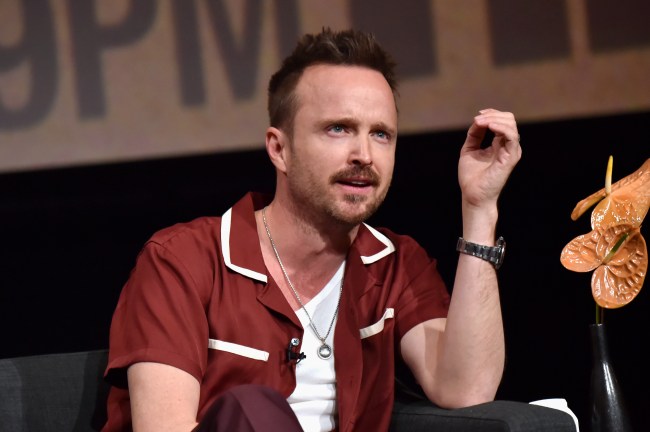 regret to inform you the celebs are at it again pic.twitter.com/pfORBiqvrX

There’s an old showbiz term called “stealing the show.” It’s when a supporting actor is so brilliant in their limited role that they outshine the lead. I understand that other celebrities were in this pledge vid, but I couldn’t tell you who they were. I’m sure they were great! In any other pledge video for any other cause, they would have been the star.

Not on Aaron Paul’s watch. Holy shit. As far as I could tell, he was the only one on the court that night. He was the only man on the battlefield. Julianne Moore just disappeared. Kristen Bell? Dismissed. Justin Theroux? More like… Justin Therouxly Forgotten!

Aaron Paul took a deep breath, set himself, and summoned the ghost of Sandy Meisner himself to deliver the performance of a lifetime. If Daniel Day Lewis and Meryl Streep had a son, he would be studying the hell out of Aaron’s subtle head nod, his furrowed brow, his complete and utter commitment to the  pledge. Not a dry eye in the house.

Oh, you bet they’re getting crushed for this.

Team America was so amazingly right about actors. pic.twitter.com/1kHRClCF2E

I think what this proves is if you leave actors without the ability to act for a few months, they will act the fuck out of anything. https://t.co/IAQnO9kzHX

See for yourself. The mentions are a bloodbath.

The sad part is, I love Aaron Paul. Who doesn’t? Jesse Pinkman delivers more pathos than Forrest Gump. But someone has to be looking out for him here. He’s gotta have a publicist or an agent who takes a look at the final product before its released. Someone to say, “hey Aaron… saw the vid. Uhm, your part was terrific, duh. Nailed it as usual. It’s just… well, when you put it together with ten other actors, all summoning their emotional demons to perform the hell out of this pledge? It looks a little, uhm, tone deaf.”

Nobody had his back. And now he’s the face of “today in celebrities not getting it whatsoever.”