Is It Ever Acceptable To Call B.S. When Someone Plays The ‘Family Emergency’ Card? 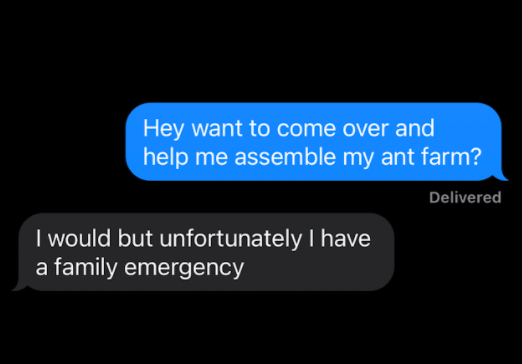 “We live in a cynical world” -Jerry Maguire

It’s that rare reason that stops all questioning in its tracks. There are no followups, no further questions your honor. The ultimate trump card—vague, powerful, and if anyone dares to ask what happened, they’re the insensitive asshole.

First of all, what qualifies as a family emergency? Death is obvious. Top of the list, death. It feels a little strange to refer to a family death as an “emergency,” unless it’s your dad or mom or a sibling. When a grandparent, or an uncle, or a second cousin passes away, it’s tragic. But an emergency? Did they leave the stove on? Do you have to run over there to feed the cat? It’s a dramatic and odd way to phrase it. If you’re going to cite a death in the family as a reason you need to change your commitments, you might say “we’ve had a loss in the family” or “I have to attend to something personal.” People aren’t going to press you for details unless they have some kind of social disorder. Nobody follows those statements with “OH! SOUNDS EXCITING! LIKE WHAT?!” Keep it vague if you’re not comfortable sharing specifics.

Other emergencies include unexpected health issues (falls, peanut allergy reactions, accidentally swallowing the balloon during the “no gag reflex” demonstration, etc.), having to pick up a child from school because the nanny got too drunk to drive (you’re fired), and learning that your wife is withdrawing the entirety of your shared checking account because she found out about family #2.

Typically, when people are being honest about an actual family emergency, they either give you more OR less information. Meaning instead of family emergency, you’re much more likely to hear one of the following: “Sorry I can’t come over, my brother was in a car accident. Everything is fine but I’m heading to the hospital.” Or, if things are bad, you might hear “Sorry I can’t come over, something came up—I’ll explain later.” In the latter case, there’s a real emergency and you don’t have time to explain it. Hell, you might not send anything at all. Bigger forces are at play. No time for texting. Your friend/boss will forgive you once they hear what happened.

Serious question: has anyone ever hit you with the family emergency text, and then when you follow up later to ask if everything was ok, and they tell you some HORRIBLE news? No. It’s ALWAYS resolved. Or, at the very least, things are looking up. Family emergencies somehow find a way of working themselves out, what a relief! Nobody ever says, “unfortunately, what I thought was a family emergency has been upgraded to a family CATASTROPHE, and everybody I was related to is now gone.”

If you believe in karma, you should stop using the family emergency out. You’re asking for trouble from the universe. Because fake family emergencies are all fun and games until you face one for real.

Don’t be the boy who cried family emergency.