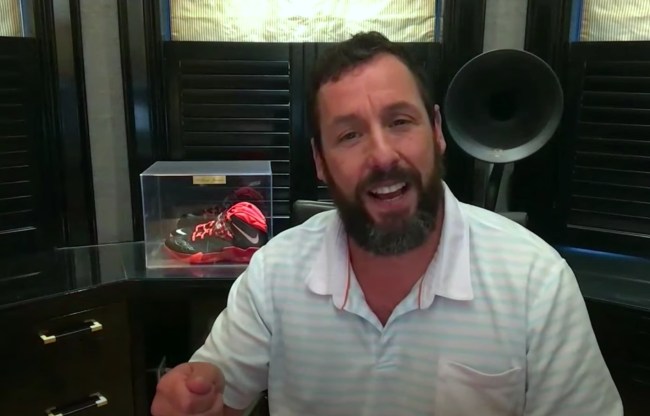 Adam Sandler was a guest on Jimmy Kimmel Live before Game 1 of the NBA Finals where the Los Angeles Lakers blew the Miami Heat out of the water. Adam Sandler‘s a lifelong basketball fan, his estimated net worth is almost half a billion dollars, he’s an A-list celebrity, and he’s one of the most famous people on the planet which also means he’s a regular fixture on TV with courtside seats.

There probably aren’t too many places in the world where Adam Sandler can go without being recognized and stopped by fans asking for a picture or autograph. He’s been famous for decades and he’s signed A LOT of weird things along the way.

During their conversation, Sandler and Kimmel discussed the weirdest thing they’ve ever been asked to autograph. Kimmel gave a copout answer and said signing ‘Guillermo’s checks’ (Jimmy’s sidekick) but Adam used the opportunity to share a story that I’m legitimately surprised he hasn’t told before.

I don’t want to ruin the details of the story but it started with Adam Sandler explaining that he was sitting in front of a pair of LeBron James’ shoes that were on display at this house he’s renting while filming a movie in Philadelphia. Kimmel joked “Isn’t that a funny thing we do? We will take another man — a man that’s bigger than we are, we will take his shoes and put them in a plexiglass box on display” which prompted the discussion about autographs.

While I 100% believe that some dude swept up Adam’s hair and put it in a plastic bag and asked him to autograph it, and I 75% believe the part about the guy trying to sell it on eBay as pubes, I’m not buying the part about Adam purchasing back the ‘pubes’ but I think we can all agree that was meant as a joke.

The only ‘weird’ autograph I have in my possession is a Coors Light can signed by John Cena at a golf course. My dad actually got it for me and the only thing they had at the time for him to sign was the Coors Light can so it makes sense but I have the autographed can sitting on my home bar and people have asked me on more than one occasion why I have a lone can of Coors Light with an autograph on it sitting next to rare whiskeys.

Sandler’s current projects listed on IMDB are Hubie Halloween (2020) and Hotel Transylvania 4 but he said the film he’s in Philly for is basketball-related so it looks like that project hasn’t made it to his IMDB profile yet.