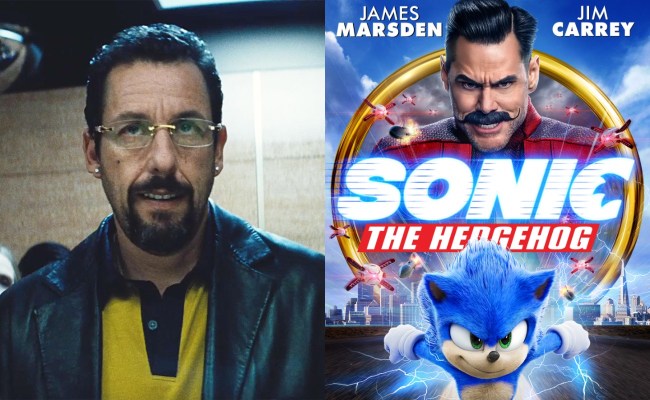 From 1994 to 1997, Carrey put together an unprecedented run of hit films, as the three movies that may define his career: The Mask, Ace Venture: Pet Detective, and Dumb and Dumber *all* came out in the year 1994. Then, in the subsequent years, he starred in Batman Forever, Ace Ventura: When Nature Calls, The Cable Guy, Liar Liar, and The Truman Show. A truly absurd run for any actor.

The same can be said of Sandler, who put together an equally-iconic string of films in the late 90s with instant classics such as Billy Madison, Happy Gilmore, The Wedding Singer, The Waterboy, and Big Daddy.

So, needless to say, when these two 90s stalwarts find a way to overlap, the kid inside of me is thrilled (but also equally bummed that these two have somehow never starred in a comedy together).

Appearing on Jimmy Kimmel Live! this week, Sandler discussed the last “big night out” he had before our current global situation, and it just so happened to be spent seeing Sonic the Hedgehog, or as he wonderfully refers to it as, “The Sonic”.

“I saw Jim Carrey’s movie, the Sonic. I noticed that people were spread out, there were only a few of us in the theaters and I was laughing very loud. The people behind us were laughing, too. So I think our last big night out: Sonic. I called [Jim] Carrey from the theater. I was telling him how funny he was while it was going on. I didn’t know it was going to be the last movie I ever saw at a movie theater.” [via Jimmy Kimmel Live!]

Great, now I’m gonna have to get obnoxiously baked and watch The Sonic this weekend, aren’t I? Oh, and hey, Hollywood: make a comedy-drama starring Carrey and Sandler about two middle-aged comedians trying to reconnect with their kids and therefore their youth. That one’s on the house.

RELATED: *Rips Bong* What If ‘Sonic’ Made Itself Look Shitty… On Purpose?