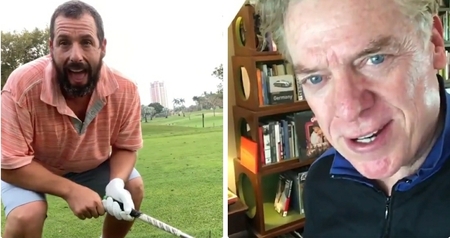 On the 25th anniversary of “Happy Gilmore” Adam Sandler decided to recreate his iconic swing from the movie.

In a video posted on Twitter Sandler explained that it was the first time in 25 years to hit a tee shot “Happy Gilmore” style before absolutely destroying a golf ball.

Happy loves you all! Thanks for everything! pic.twitter.com/p1aY9JcFWh

In the video, Sandler called out his nemesis in the movie Shooter McGavin.

Shooter McGavin, this is for you,”. “I’m not lying to you. That is smashed. Smashed. That went pretty well. You’re dead, Shooter!”

Update: Actor Christopher McDonald reprised his role as Shooter McGavin on social media to fire back at Sandler.