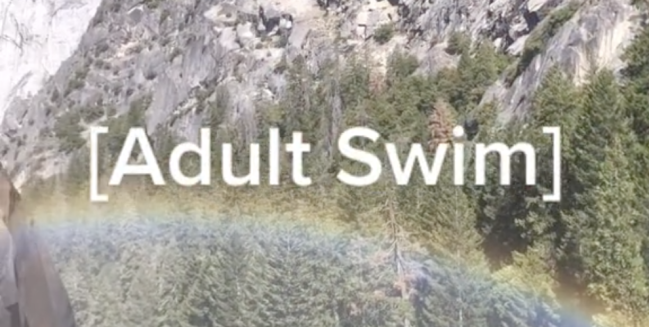 Are you familiar with Adult Swim? Cartoon Network’s late-night programming block airs from 8pm to 6am every night and housed classic animated content like Robot Chicken, King Of The Hill and Family Guy. While the lineup of shows is always great, some of the best cinematography comes in and out of commercial breaks.

Between advertisements, the network shows short clips called “bumpers,” in which they plugged the adult-only block. The clips feature inspirational quotes and off-humor jokes, as well as various visuals from time-lapses to scenics and other avant-garde editing.

Every single video ends with the words “Adult Swim” or “[AS],” and appear in creative ways. TikTok’s newest trend celebrates the “bumps” that often seemed more like short art films. We got in on the trend and gave it our spin, take a look:

User @Vano3000 began the trend with his remix of BADBADNOTGOOD’s “Time Moves Slow” track. The original video showed him eating a sandwich, but he followed it up with a second video that sparked the virility.

Since then, more than ONE BILLION users have hopped on the sound and put their twist on the late-night Cartoon Network bumps. Here are some of the top videos:

be patient, you’ll find your place [AS] #as #adultswim #adultswimbump #vano3000 #fyp #golftok

this took so many tries 😭 #adultswim #as #fyp

And here are some of my favorites, because I can’t get enough:

We had to hop on the trend. [as] #adultswim #as #blackstone #blackstonegriddle

According to Tricia Melton, the Chief Marketing Officer of Warner Brothers Kids, Young Adult, and Classics, the bumps began as a way of letting parents know that the programming was no longer kid-friendly.

Now, she says that they have evolved into “a way for us to, very personally, talk to the audience.” The first bump aired in 2003 and the network has since aired more than 20,000. TikTok’s trend caught the eyes of the network and the official Adult Swim account thanked everyone for hopping on.