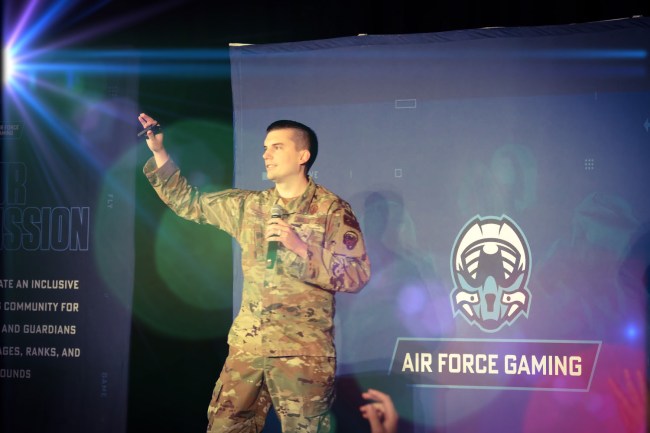 Every job has its up and downs, its highs and lows. For Air Force Capt. Oliver Parsons, the lows hit him the hardest during a grueling stretch of 70-90 hour work weeks in North Dakota, where he started playing single-player video games to “shut off from the world and escape.”

Capt. Oliver Parsons is credited as the founder and leader of Air Force Gaming, the Department of the U.S. Air Force’s hub for intramural gaming and esports. The organization made its official debut on November 11th, 2020, quickly scaling in popularity with Airmen and Guardians; over 15,000 Airmen and Guardians are now gaming in tournaments on the dedicated platform.

Like so many others in the U.S. Armed Forces, Parsons found a specific kind of escapism in video games. Gaming helped him deal with depression and isolation after losing his motivation for self-care. Out of that experience, he found so much more: A sense of community and camaraderie, along with a very specific mission to help his fellow Airmen going through similar mental health struggles.

According to Col. Marc Adair, AFSVC chief of programs, over 86% of Airmen and Guardians between the ages of 18-34 identify as gamers. With so much intense interest in gaming, it was only a matter of time before someone stepped up to organize an esports platform for the Air Force similar to U.S. Army Esports and the U.S. Navy’s Goats & Glory Esports team, both of whom have snowballed in popularity by streaming on Twitch.

“I realized there’s not a whole lot of positivity and not too much connectivity within the Air Force,” Parsons told Newsweek last year after the organization launched. “What we wanted to do was use a digital space to connect airmen, and now space professionals, together to compete and play different video game titles together, and build camaraderie across the service, where time, space, location necessarily doesn’t matter.”

DAFGL is about to start its Season 2, with Airmen and Guardians deployed around the world set to participate in tournaments for Super Smash Bros. Ultimate, Apex Legends, and Call of Duty: Warzone, along with League of Legends and Rocket League. The season is powered by a sponsorship with USAA, which unlocked new features for the platform. According to a press release, winners in the tournaments will “receive prizes to include championship jerseys, DAFGL products and the chance to represent the Department of the Air Force as the official team in future public-facing events and competitions.”

Register below to secure your spot in the battle for the DAFGL Championship titles in:

I got a chance to talk to Capt. Oliver Parsons via email about Air Force Gaming and his plans for the future, along with how he hopes the platform can help those who are self-isolating or experiencing depression when stationed in remote locations. 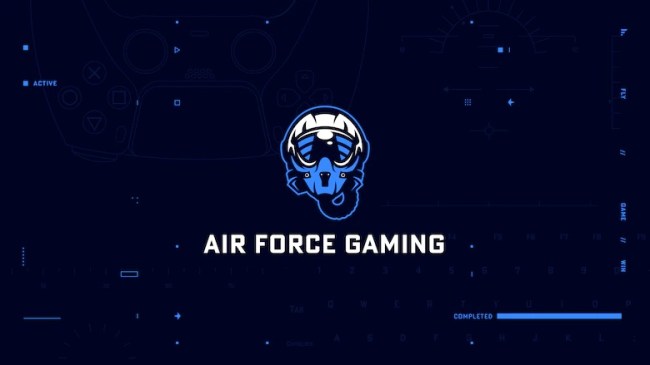 BROBIBLE: How did the Air Force Gaming community begin?

Capt. OLIVER PARSONS: To understand this, you have to know a little about me first. I joined the Air Force in 2013 and had been serving for six years prior to starting Air Force Gaming.

My first day-to-day job in the Air Force was at Minot AFB ND where I did command and control for our Intercontinental Ballistic Missiles (ICBM) in the Nuclear & Missile Operations career field until 2018. This is obviously a pretty stressful and isolating job… but it wasn’t until I was stationed at this northern tier base that I truly felt depressed.

My depression took many forms, but basically, I lost motivation to self-care, I turned to work to distract myself, and my friends had a hard time understanding what I was going through, so when I did get off working 70-90 hour weeks, I used single-player video games to shut myself off from the world and escape.

In 2018, my wife and I decided to start regularly attending our online church, Life.Church. One week the pastor of the church mentioned that they were starting programming on Twitch, which sparked my curiosity. Fast forward to 2019, I learned that virtual engagement with a positive community of gamers helped lead me to re-joining the world. If it wasn’t for that online community of gamers, I don’t know where I’d be today… but it wouldn’t be anywhere good.

After this discovery, I realized that this could be something that would help both my friends (and even people I hadn’t met) with their own mental health struggles. So in 2019, I made the decision to start a grassroots effort for others who may be experiencing depression or isolation.

This initially took the shape of a Discord. Within just a few days after we began the community, we exploded.

Before 2019 concluded we boasted a membership of 2K+ Total-Force (Active Duty, Guard, Reserves, and Government Civilian) members of this “small” community.

Amazingly, myself and just a handful of passionate Airmen/Guardians ran this in our free time, outside our normal day-to-day job.

With these metrics in hand and passionate Airmen/Guardians alongside me, I had a revelation – what if the Department of the Air Force made this program official?

I’d seen what other military branches were doing with gaming, and I couldn’t help but think that my “little” organization is already providing more value for the actual military than anything else out there.

So I took to the internet. I found a general’s email and I shoot my shot. Mind you, this is a major faux-pas…but she likes the idea!

The next thing I know, I’m on my way to Joint Base San Antonio Lackland and presenting the program’s foundations to some of the top military brass… and they liked it!

It didn’t stop there, my team and I took to LinkedIn and had meeting after meeting talking with various senior leaders, and leaders in the gaming industry to pitch our pitch. We definitely did something right because before I knew it I was transferred to the Air Force Services Center, with the intention to create a scalable, digital community for gamers like me, and thus Air Force Gaming became official.

As an effort to further enhance the foundations we had built, we decided to bring on Rally Cry – a tech partner who provides our digital organizing services and allows us to scale the program right out of the box – to take us to the next level.

What did it take to get the DAF Gaming League off the ground?

The hardest part was actually just getting the word out. We were operating as this grassroots organization without any sort of blessing from the top, and that meant getting scrappy. We took Zoom meetings with anyone who’d have us and consistently pivoted our programming to meet any new need that we discovered.

After working alongside the Air Force Services Center for some months, they decided to take us officially on. Where we decided that to really take off we needed to combine the program with technology. The tech has now become the backbone of our program because it just makes things easier for everyone. All our players have to do is provide an email address and sign up for games, the tech takes care of it from there and sets up leagues, matches and tournaments that anyone can participate in. We were even able to use this same tech to set up special Christmas programs for deployed troops all around the world!
DAFGL is our version of digital intramurals. The Department of the Air Force currently runs traditional intramurals in flag football, softball, basketball, etc.

With DAFGL we currently have two seasons: spring and winter. With COVID keeping everyone inside and isolated, we wanted to rally Airmen & Guardians all around the world to a regularly scheduled competitive league that brought the entire global force together.

There’s a lot of overlap in the skillsets and values that come with excelling at e-sports and those of service in the Air Force. Could you speak to that?

It is amazing what Airmen/Guardians can now do in the digital space. Through AFG Airmen/Guardians get to use gaming/competitions to hone in on teamwork, hand/eye coordination, wargaming strategy, and real-time decision making.
We also have an initiative we call the Ambassador program where we develop Airmen/Guardians from all ranks and backgrounds to digitally lead thousands of their peers from all around the world. They are able to use AFG’s sandbox environment to develop leadership skills, and freely test/experiment with innovative ideas to enhance the entire Department of Defense.

Becoming an e-sports pro has emerged as a viable career aspiration for many in the past 10 years. As esports continues to grow, do you see a path with DAF Gaming League where it incubates those aspirations while one is serving their country?

Most definitely! Some of our winners from Season 1 are extremely talented at their specific games. Once a team or player wins out of DAFGL, they will be able to represent the Department of the Air Force when competing against other US or NATO allied military services and professional esports teams.

We also have been able to build relationships and connections with the industry to be able to help those that decide to exit the Dept of the Air Force to break into the gaming industry.

What are your aspirations for growth in the DAF Gaming League?

We hope to make DAFGL an industry-leading league that not only carves paths for the military branches all around the world but also be a leader in the gaming industry when it comes to regional and global secure competitive leagues.

Selfishly, I’d also like to add Halo Infinite next season when it comes out – mostly because I think I actually have a shot at winning!

Are there any plans in place for big-name e-sports pros or orgs (IE: Nadeshot, 100 Thieves, FaZe) to support?

The US Air Force Recruiting recently partnered with Dignitas, and we’re excited to work with them both to provide really cool opportunities for our Airmen/Guardians.

We have been building and strengthening relationships with various esports organizations and we look forward to future collaborations with a wide variety of professional teams and players/influencers.

That said, we want the core of the program to always look inward rather than outward. More than 86% of Airmen between 18-35 identify as gamers, and we see this community as an amazing way to connect people in ways that span rank, age, location and more.

Through our work at AFG, I’ve heard so many stories of Airmen and Guardians that just needed a way to connect with others. Whether they were self-isolating from depression, deployed to remote locations or even being stationed in a new place, the connections they’ve formed have become an integral part of their daily lives.

100%! We are developing a friendly rivalry between Space Force Gaming & Marine Corps Gaming. Also I think the Army vs Air Force rivalry will live on through US Army Esports & Air Force Gaming. We’ve got a couple cool things in the works that I can’t talk about yet which should only serve to strengthen these rivalries in pretty fun ways.

What are your favorite e-sports tournaments to play in, personally and why? (IE: Rocket League, CoD, etc)

My favorite game of all time is Halo. Whether it’s OG Halo with the ridiculous pistol, played over LANs, all the way up to the new Halo beta that’s underway now…Halo is my jam.

As you can probably guess, that means I’m really looking forward to Halo Infinite‘s release and 343’s competitive esports ecosystem updates – and I really hope to bring them into Air Force Gaming to share the love of the game with my new digital friends from all around the world.

What are your favorite e-sports tournaments to watch?

I really enjoy watching Call of Duty League and Rocket League. With some time in the game and practice I’m proudly and solidly average at CoD…but absolutely horrible at Rocket League.

What gets me even more excited is seeing our Air Force & Space Force teams kicking butt!