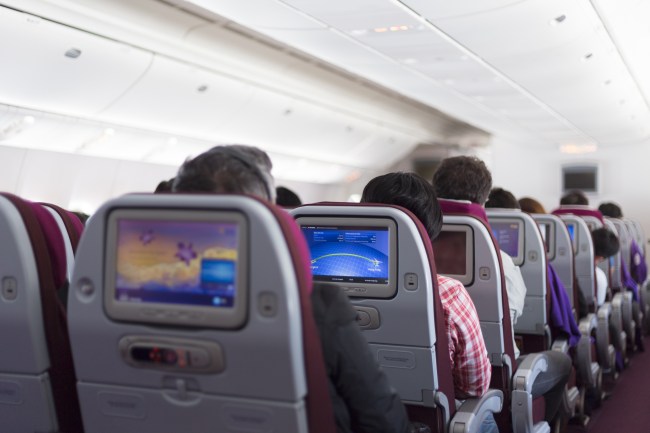 I was on a plane last year that felt like a goddamn sauna. Before we took off, I reached up to the air conditioning knob above me for some lukewarm ventilation. Then, the businessman douche canoe sitting next to me said, “Hate to break it to you, but the air conditioning in planes is just an aggregation of everyone’s breath.” Plane breath. The fucking worst. I sheepishly turned the air conditioning off and sat in a pool of my own sweat for the entire four hour flight, suppressing urges to hurl myself out of the emergency exit.

The plane breath air conditioning is just one of the many aviation atrocities–right up there with shoebox sized bathrooms, prison food, and carriers shrinking seats to pack passengers in like cattle.

One, if not the only luxury of flying is the in-flight entertainment. Seatback screens with a surprisingly good selection of movies and shows. But, according to The New York Times, those may be ripped from our dead, lifeless hands too.

Dan McKone, managing director and head of the travel and transportation practice at the consulting firm L.E.K., says that the entertainment systems can cost up to $10,000 per seat to install and add bulk and weight to the seats, thus limiting the number of passengers one aircraft can fly. Fewer passengers equals fewer dollars.

McKone claims that more carriers will phase out the in-flight entertainment we know now in favor of a bring-your-own-device model.

American and United Airlines are phasing out screens on new short-haul aircraft in favor of content offerings that passengers can stream from their personal devices.

Hawaiian Airlines is also going without seatback screens in its new A321 neo planes.

“I think you’re going to continue to see increasing economic pressure not to replace I.F.E., particularly on the shorter-haul fleets,” McKone said.

Welp, it looks like we’ll all be prisoners to the pitfalls of airplane Wi-Fi before we know it. I can’t wait to make it through a half episode of Curb Your Enthusiasm till my shitty iPhone battery craps out on me.