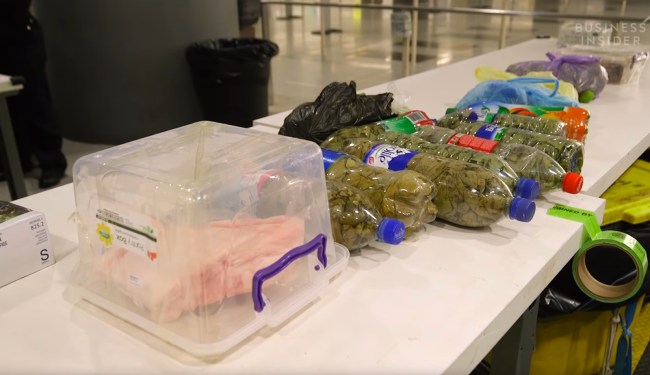 Did you ever wonder what happens to all of the illegal items people try to smuggle inside suitcases, carry-on luggage and stuck up their butts at airports?

Well, I’m not sure about the butt stuff, but this behind-the-scenes look at how customs finds and disposes of contraband is pretty damn fascinating.

At one of the busiest airport in the United States, over 1,000 bags an hour are checked for narcotics and illicit food.

Customs and Border Patrol officials are tasked with stopping these goods from entering the United States.

The first line of defense is a canine named Spike (and a bunch of his four-legged coworkers) trained to sniff out narcotics. Once the drugs are found, Spike does a “passive response” sit to tell his human partner “we’ve got something, bro.”

Thankfully, drugs aren’t the most commonly seized items at the airport. People spend way more time and effort trying to smuggle food back into the US.

Travelers are asked to declare any food items tucked into their luggage.

If they fail to report items and get busted, they face a $1000 fine for the first offense.

As the video points out, the agriculture agents aren’t really concerned with people trying to bring in food, their real issue is with the bugs that might be hiding inside the mangos, bananas, and meat.

Those bugs could end up costing the United States billions of dollars in lost crops.

Long story short, don’t try to bring drugs into the country. You could end up in jail.

And don’t try to smuggle in any food. That banana isn’t worth a $1,000 fine and possibly billions of dollars.