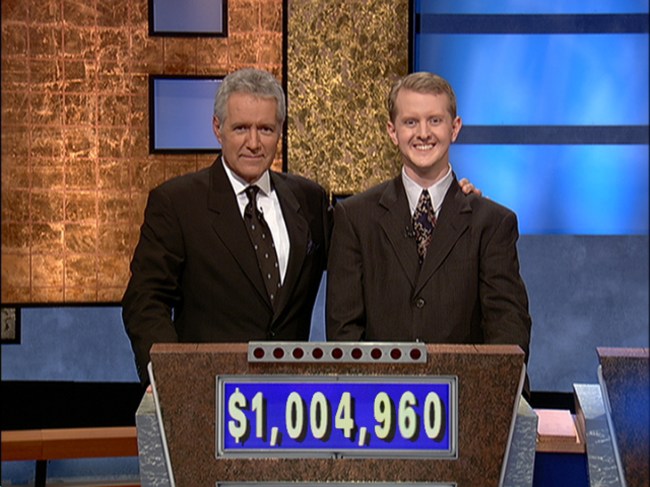 Somewhere on a cumulus cloud behind the pearly gates of heaven, Alex Trebek is sharing a beer with Harambe and ruminating over how a toddler’s parents could be so negligent and why Ken Jennings hasn’t been ruined over a joke he made in 2014.

Less than one day after Jeopardy! champion and record-holder Ken Jennings was named as one of the first interim hosts of the iconic show, Twitter dusted off his least proud public moment as evidence the universe should never grant him any future success.

As Page Six points out, the 46-year-old Jennings already apologized for this tweet back in 2018, saying:

“I never did a public flogging thing for this but I did apologize personally to angry/hurt people who reached out personally. it was a joke so inept that it meant something very different in my head & I regret the ableist plain reading of it!”

This is from the last 24 hours:

Ken is a bully who thinks it's fun to mock people with disabilities.

Then double down when called out instead of apologizing.

Ken Jennings could delete this tweet right now if he wanted. In the meantime, I recommend against being his fan. https://t.co/jVNCUp0Upm

I don't want Ken Jennings to lose his gig as host of Jeopardy because of a fucked up post on social media. I want him to lose the gig because he's an unmitigated dick and is utterly undeserving to stand for even a brief time where Alex Trebek stood for years.

This is fucking disgusting you should delete this.

One look at Ken Jennings sentient-jar-of-mayonnaise-lookin’-ass and anyone with a functioning frontal cortex can see that he’s not the cancer that needs cutting out.

He’s just a guy who happens to be good at a game show and made a joke that wasn’t received well by everyone that one time.

Let’s all stop pretending that we’re not going to hear shit 10 times more insulting at the Thanksgiving table this year.