Despite Their Different Colors, All Skittles Are The Same Flavor? That’s What Science Says! 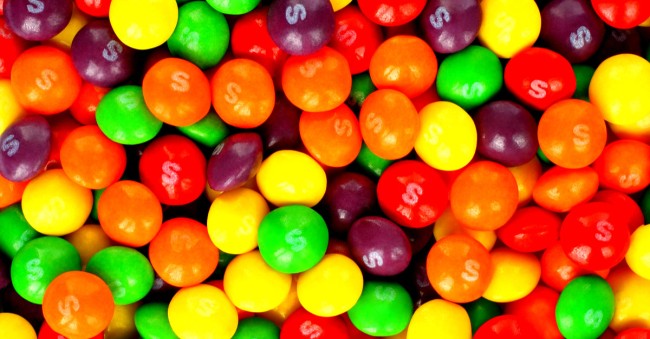 Ready for your world to be shattered? Skittles, despite their many colors, are all actually the same flavor, according to a Brandeis University neuropsychologist who specializes in taste. Most gummy candies are too. And so are Froot Loops. Has your head exploded yet?

Please, no one tell Marshawn Lynch. I’m not sure he could handle it.

Anyway, this neuropsychologist slash spoilsport named Don Katz explained why we “think” our Skittles are all different flavors to NPR.

“I have a colleague in the U.K., Charles Spence, who did the most wonderful experiment,” Katz says. “He took normal college students and gave them a row of clear beverages in clear glass bottles. The beverages had fruit flavorings. One was orange, one was grape, apple, lemon.”

Then he added some food coloring to each beverage. The WRONG food coloring, if you know what I mean? Guess what happened?

“While I wouldn’t say they went to chance, their ability to tell which was which got really subpar all of the sudden,” Katz says. “The orange beverage tasted orange [to them]. The yellow beverage tasted like lemonade. There wasn’t a thing they could do about it.”

It was so powerful that even when Spence told the students that it was his job as a scientist to mess with the conditions and asked them to just tell him what they tasted without considering the color, they still couldn’t do it.

Just found out that Skittles all taste exactly the same only their colors and smell are different pic.twitter.com/taxMttWTzp

According to Katz, the candy companies, as one would expect (it is their job, after all) know all about this phenomenon.

“…I don’t usually talk about gummy bears, what I like to talk about is Skittles,” Katz says. “The Skittles people, being much smarter than most of us, recognized that it is cheaper to make things smell and look different than it is to make them actually taste different.”

Katz continues: “So, Skittles have different fragrances and different colors — but they all taste exactly the same.”

Katz says this works because our brains are used to processing certain sensory cues together. For example, our brains associate the color yellow, a lemon smell and a slightly acidic taste with each other. When you’re offered two of these three sensory cues, your brain will fill in the blanks.

“There are some fruity candies in which they do specific flavorings in different ones; higher-end gummy bears actually do taste different,” Katz says. “But yeah, a lot of candy companies have figured out this is just a way to save money.”

I know right? Taste the rainbow, my butt.

Because, of course, like pretty much everyone, she didn’t believe it, Rachel Hosie, an editor at The Independent, conducted a blind taste test of Skittles to see if she could tell the flavors.

So yes I ate more things on camera https://t.co/30ankfIaFT

She got three out of five correct, so maybe some of the rainbow is actually in there.