11-Foot Alligator Smashes Window, Breaks Into Florida Home And Goes For The Wine 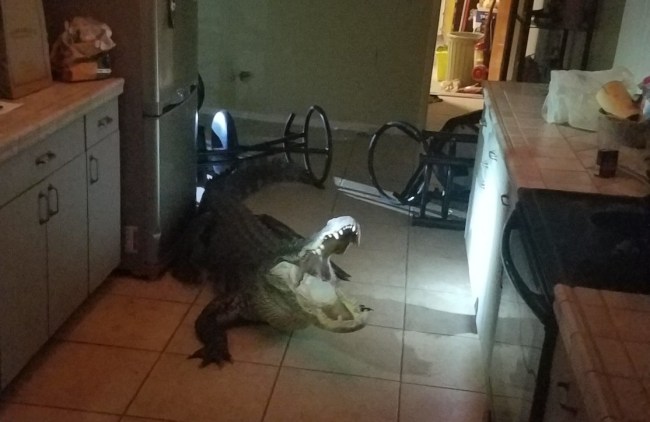 Imagine hearing noises in the middle of the night and thinking you are a victim of a robbery only for it to be way scarier — an alligator busting into your home. That is the nightmare scenario that a Florida family dealt with early Friday morning.

We take you to Clearwater, Florida where this scary home invasion occurred. At around 3 a.m. on Friday morning an 11-foot-long alligator smashed a window and then snuck into the home. From there, the scaly creature went straight for the wine. Alligators, they’re just like us! The alligator attacked the wine in the home, breaking several bottles as well as damaging bar stools, walls and tables.

See you later, alligator 🐊 A scaly 11-foot-long gator broke into a Clearwater home overnight through some low windows in their kitchen. Clearwater Police officers and a trapper responded to the scene to capture and remove the gator. There were no injuries. pic.twitter.com/jsOxRNfkEV

“An unwanted overnight visitor had to be removed from a home on Eagles Landing Circle West in Clearwater. The 11-foot-long gator broke into the home through some low windows in the kitchen,” Clearwater Police wrote on Facebook. “The homeowner called police and a trapper also responded to the scene. The gator was captured and there were no injuries.”

Reporter Dan Matics from FOX 13 took video from the home and presented the damage that the 11-foot alligator did.

Clearwater, Florida is no stranger to gators. Just last year, a 35-year-old man was bitten by an 11-foot alligator while he was playing disc golf.

If you live in Florida why would you not dig a ditch around your house, fill it with gasoline and have a moat of fire to protect you from alligators and Florida Man?