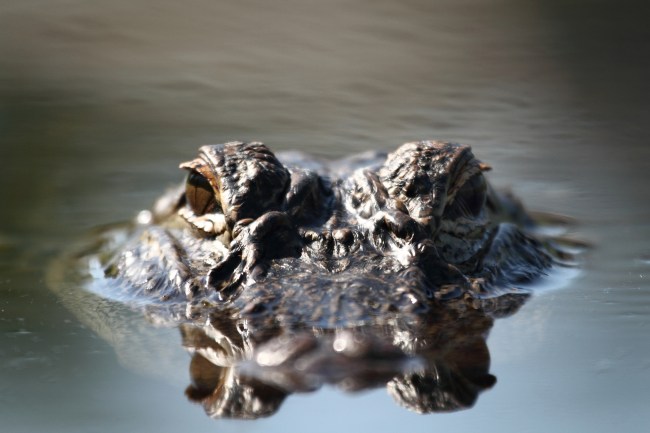 I’m having trouble wrapping my mind around the fact that it was somebody’s job to come up with this experiment and that they were then able to convince countless people to fund it because this sounds like something some rednecks from Florida would get caught doing and end up in the news.

The basis of the experiment is this: scientists dropped two dead alligators 6,650-feet to the bottom of the Gulf of Mexico. The goal was to see which oceanic creatures would feed on reptiles in these extreme depths. What showed up were human baby-sized alien crustaceans that look like they’re straight out of a Science Fiction film.

This was an experiment conducted by marine biologists from the Louisiana Universities Marine Consortium (LUMCON) and they filmed it to see how these lowland creatures (gators) would impact the deep-water ecosystems. I think it’s safe to say that nobody expected this much action:

Here are the stated goals from below their YouTube video:

Alligators were dropped to the bottom of the Gulf of Mexico in February 2019 for the first-ever experiment on what eats reptiles in the world’s deep oceans. This research will help us learn more about:

The scientists expected these enormous isopods to show up and devour the alligator carcasses at some point but they definitely didn’t expect them to show up that quickly. At those depths, things tend to happen very slowly and this was certainly a shocker.

The isopods, which were also joined by other scavengers, including amphipods and grenadiers, tore into the alligators’ tough flesh faster than expected. They even managed to crawl inside the alligator, and eat the carcass from the inside out.

“We had assumed given the tough hide of the alligator it might take a while for deep-sea animals to access the soft tissue,” Craig McClain, a marine biologist and executive director of the LUMCON told the Houston Chronicle. “But the giant isopods seemed to find soft spots in the hide on the abdomen and in the armpits.” (via Geek.com)

I fully expect this to be the next genre of videos taking off on Tik-Tok: people dropping things to the bottom of the ocean to see what will happen. I’m also 100% expecting to see this footage on ‘Shark Week’ or something simliar in the next few months.