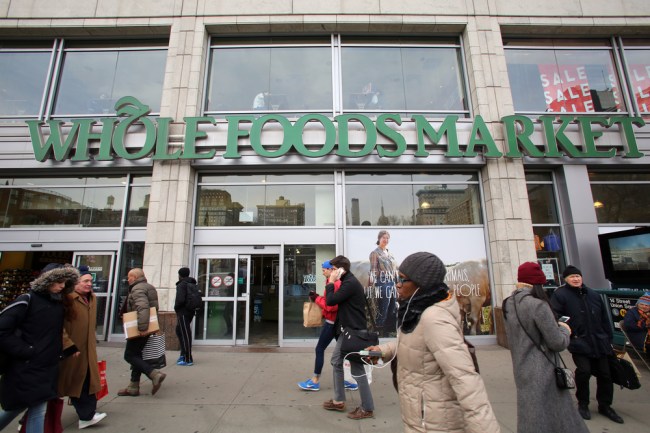 Amazon is really starting to make its mark on Whole Foods, which they purchased last June for $13.7 billion. First, they lowered prices on many Whole Foods staples, and now they will offer a grocery delivery service called “Whole Foods Prime Now.” However, the company will only offer Whole Foods delivery in certain cities – Austin, Cincinnati, Dallas, and Virginia Beach, Virginia. Amazon Prime members living in the neighborhoods of these four cities can start getting free food delivery beginning on Thursday.

Amazon’s latest perk for Prime members will give their customers free, two-hour delivery from Whole Foods stores to their homes if they live in approved areas. Amazon will also offer one-hour delivery for $7.99 on orders over $35 in case you really, really need 365 Organic Peanut Butter and Ataulfo mangoes ASAP. Deliveries will be made by Amazon Flex drivers, who are contract drivers that use their own vehicles, similar to Uber. The service will reportedly be available during stores hours, generally, 8 AM to 10 PM.

Customers in the chosen cities will be able to have items such as fresh produce, meat, seafood, and flowers from Whole Foods delivered to them. But not all Whole Foods products will be available to be ordered for delivery. “We might not have every last item that could be available in your local store but we’re going to have the vast majority of them,” said Stephenie Landry, vice president of Prime Now, Amazon Fresh, and Amazon Restaurants.

For those of you lucky enough to be in the delivery areas, you can do so by going on Amazon’s website or Amazon’s Prime Now app. You’ll punch in your zip code to see if you qualify for the delivery service. For the rest of us who don’t live in one of those cities, we’ll have to hope it is an immediate success and it is rolled out nationwide to Whole Foods’ 457 nationwide stores. There are rumors that Amazon could expand the Whole Foods Prime Now service nationwide over the year.