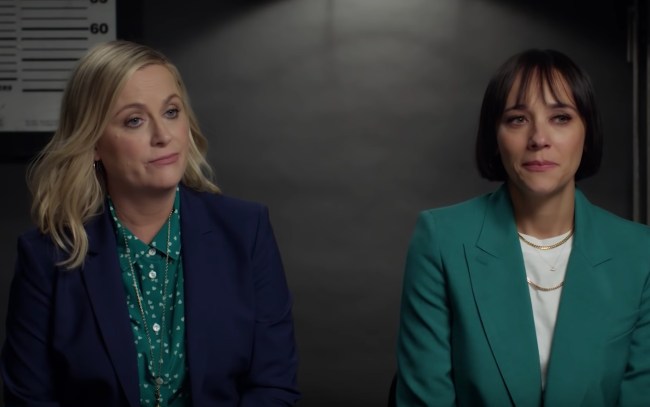 Amy Poehler is a national treasure. I was first hooked by her ‘Weekend Update’ chemistry on Saturday Night Live with Tina Fey and like millions of other fans I’ve been re-watching NBC’s Parks and Recreation for years. I will note that I’m a bigger fan of Tina Fey‘s 30 Rock than Parks and Rec but I don’t think a week goes by where I don’t watch at least a handful of P and R episodes.

As I’m sure you already know, Amy Poehler played Leslie Knope Parks and Recreation and her best friend on the show as Ann Perkins played by Rashida Jones. The two had a mini-reunion on Vanity Fair‘s YouTube channel where Rashida Jones made Amy Poehler take a lie detector test.

This type of lie detector test is famously unreliable and can be easily manipulated but I highly doubt Amy Poehler went into this with a metal tack underneath her toe. Instead, we get to watch Poehler sweat it out as Rashida drills her on a possible Parks and Recreation reunion that would 100% happen if Chris Pratt wasn’t the busiest actor on the planet. She also asks Amy about a secret group chat that 100% exists.

Here’s the full YouTube clip as well as some highlights below from Twitter that cut to the good parts.

Hi. This is a video of Amy Poehler and Rashida Jones taking a lie detector test. It is fabulous. And they talk a lot of Parks. So I feel like I HAVE to share it. Enjoy. ☺️❤️ https://t.co/yylegwiwrC pic.twitter.com/gc5wtc4bpS

the way amy poehler and rashida jones are literal leslie and ann in this clip truly amazes me pic.twitter.com/3XIFrKlMew

okay but LOOK AT HER 😭 amy poehler i love u sm this is ridiculous pic.twitter.com/YSdBdChJ5C

Amy Poehler could say any word and I’d laugh

I truly believe we’ll see some sort of Parks and Recreation reunion at some point in the distant future even if it’s a one-off holiday episode but it will take the stars perfectly aligning and Chris Pratt’s career needs to slow down a little bit because he will never have time to get this done as long as he continues to fly all over the planet filming the biggest budget Hollywood films every year.