Amy Schumer Says She Was Stopped From Making Jokes About Joe Rogan, Alec Baldwin And More During The Oscars 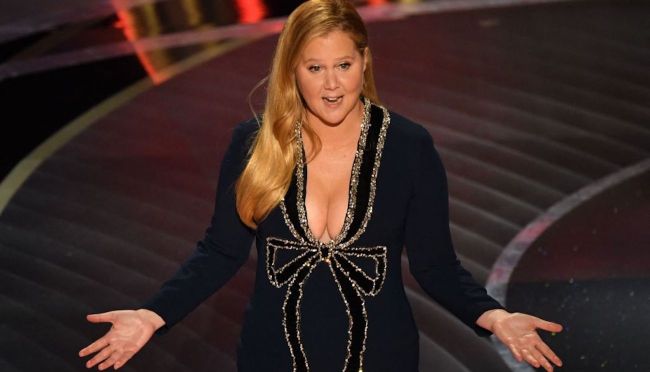 During a recent set at Las Vegas’s Mirage Theatre on Saturday, standup comedian Amy Schumer — who was one of three hosts of this year’s Academy Awards alongside Regina Hall and Wanda Sykes — lamented the fact that she was not permitted to make a joke about Alec Baldwin while Will Smith was “allowed” to walk on the stage and smack Chris Rock. This, of course, is an absurd false equivalency given that the host is a part of the show and their lines are planned, while what Smith did was entirely and tragically spontaneous.

In addition to the joke about Baldwin, Schumer also had jokes about Joe Rogan and James Franco that were apparently cut from the telecast, according to Vanity Fair.

Amy Schumer says she had jokes about Joe Rogan, Alec Baldwin, and James Franco planned for the Oscars

Schumer went on to share some jokes supposedly cut from the Academy Awards telecast and then dived into a few jokes about Joe Rogan, sexual-misconduct allegations against James Franco (Franco has denied the allegations), and the Rust shooting.

“Don’t Look Up is the name of a movie? More like don’t look down the barrel of Alec Baldwin’s shotgun,” she said. “I wasn’t allowed to say any of that [at the Oscars], but you can just come up and [slap] someone.” [via Vanity Fair]

One joke that Schumer did make has gone viral since the show, but for all the wrong reasons, as some viewers believe that her climate change bit about Leonardo DiCaprio was stolen from Twitter.

Luckily for Schumer, though, if there was ever a year to put forth a subpar hosting performance, it was certainly this year as all of the subsequent headlines have been dominated by Will Smith and the Slap Heard ‘Round The World.

RELATED: It Appears That Amy Schumer’s Oscars Joke About Leonardo DiCaprio Was Plagiarized