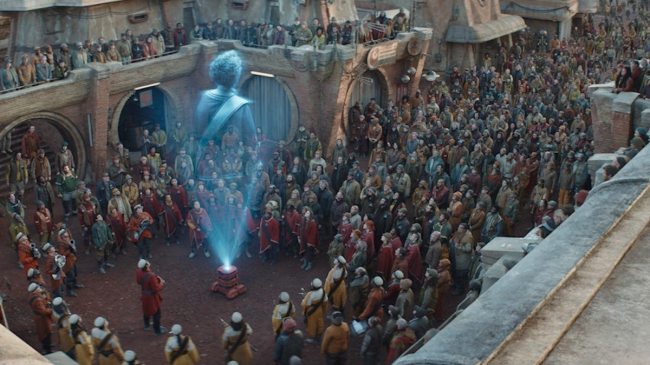 What Disney+ has pulled off with Andor — a legitimately deep sociopolitical espionage thriller — is nothing short of remarkable. Having long considered Rogue One to be my favorite Star Wars entry of all time, its prequel Andor has undoubtedly expanded the story of the Rebel Alliance with the same aplomb and trajectory — when it’s all said and done, it wouldn’t shock me if Andor, too, is considered to be one of the best Star Wars “things” ever made.

And for that, the Mouse House deserves a ton of credit. They gave Tony Gilroy the choppa and let that man sing. Unfortunately, and unsurprisingly, Gilroy — who wrote the original Bourne movies while also directing George Clooney to an Oscar-nominated performance in Michael Clayton — wasn’t able to get *all* of his creative expressions into the series, as a new story from Empire Magazine details how Disney+ axed what could’ve been the franchise’s first-ever F-bomb.

Editor’s Note: this article will now contain SPOILERS for the Season 1 finale of Andor

During Marva’s climatic post-mortem speech in the season one finale, she eventually signs off by saying “Fight the Empire.” According to the Andor creative team, though, that line was originally written as “F the Empire.”

“Fiona’s voice was over all of us,” Dedra Meero actress Denise Gough says, recalling the finale’s fire-and-fury funeral monologue from Ferrix’s formidable matriarch. “Except, at the end, she didn’t say, ‘Fight the Empire!’ She said, ‘F*** the Empire!’ Which we were all really excited about. But we weren’t allowed to keep it, obviously.” [via Empire Magazine]

All 12 episodes of the first season of Andor are currently streaming on Disney+. Season two will also consist of 12 episodes and will lead directly into the events of Rogue One.

RELATED: Another Member Of Yoda’s Species Has Proven That The Famed Jedi Speaks Backwards For No Reason